Moloka'i (pronounced MO-lo-kah'-ee with a glottal stop--shut off all air output through your throat-- between the last two syllables) is one of the least visited and one of the most purely Hawaiian of the Hawai'i Island Chain.  I spent a week here in 1986 and several more days in 2009.  The memories are indelible.  And the best of them were experienced on foot, in places automobiles can't go.

On both visits I hiked the rambling undeveloped beaches of Kephui Beach and Papohaku Beach Park on the western end of the island, with views of Oahu just across the Kaiwi Channel: 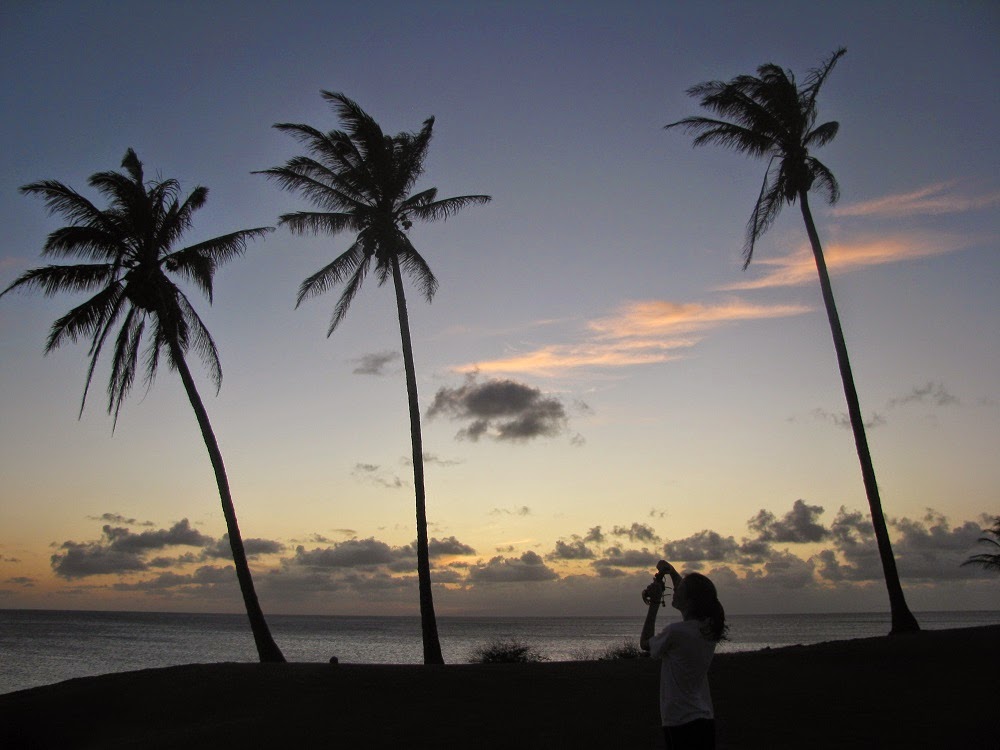 And on both visits I walked the famous mule trail, which switches back and forth down a 1500 foot cliff to the inaccessible Leper Colony, home of the recently Sainted Father Damien, on the Kalaupapa Peninsula.  The trail starts at Pala'au State Park, famous for its sacred phallic rock, a place of pilgrimage for barren women, accessible via a quarter mile foot-only trail ... 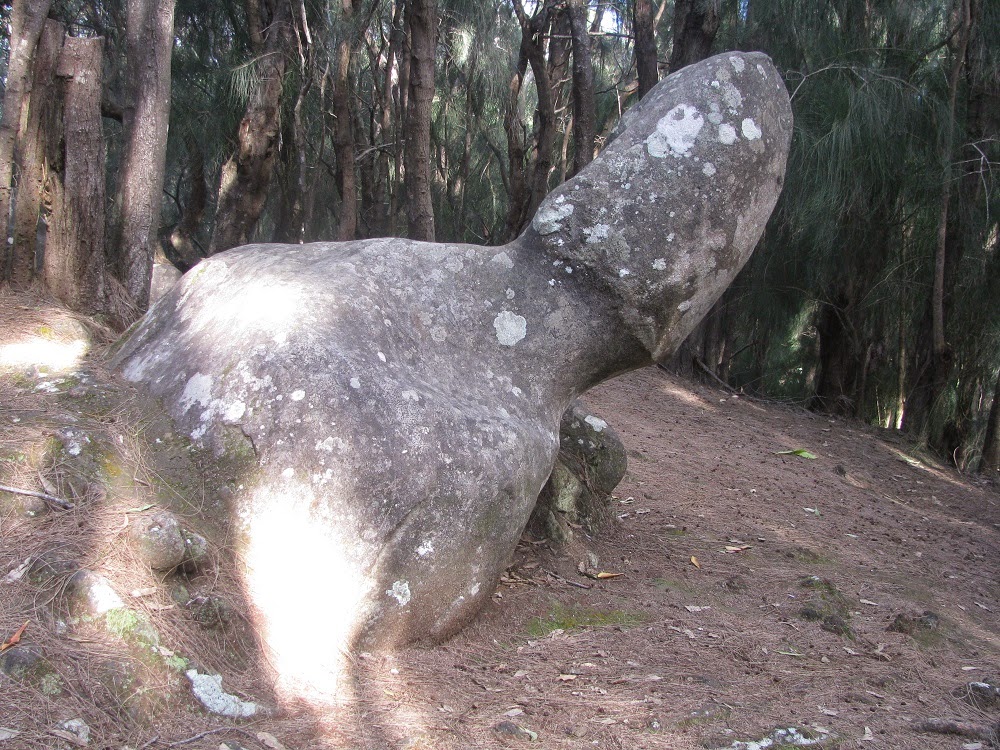 ... as well as the overlook to the Kalaupapa Peninsula and Awahua Beach: 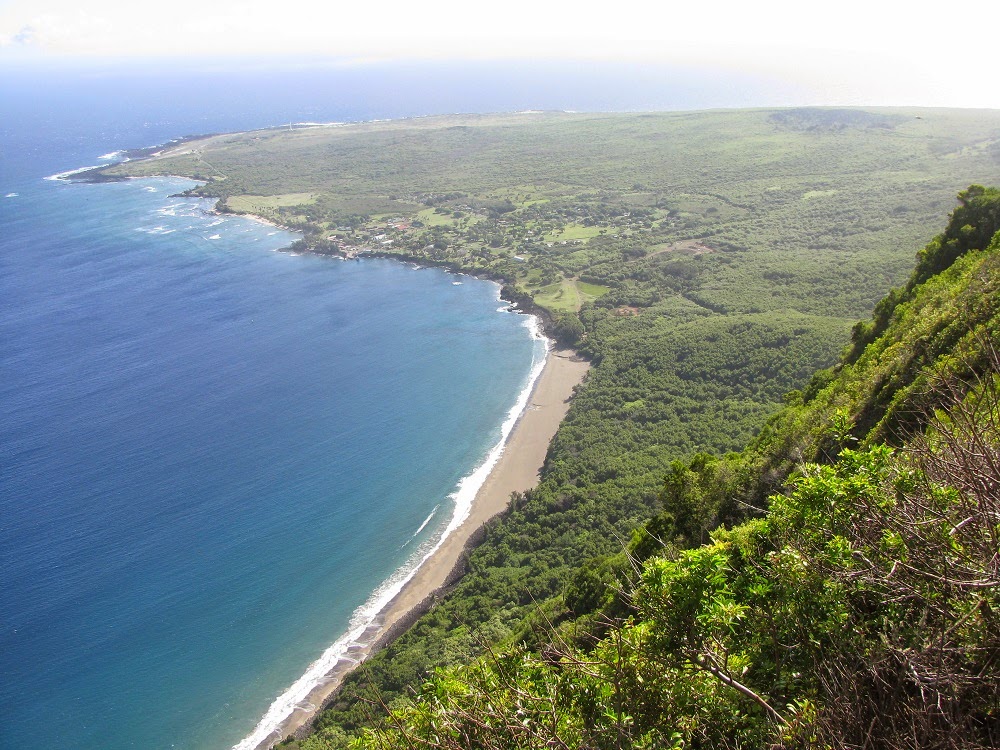 The 2.9 mile trail does indeed descend the precipitous cliff you see in the foreground above and then follows alongside Awahua Beach, ending at the leper colony at Kalaupapa, the town in the forefront of the peninsula.  Here's a helicopter shot of the steep part of the trail taken from a post card followed by my own shot of the route of the trail, taken from the harbor area: 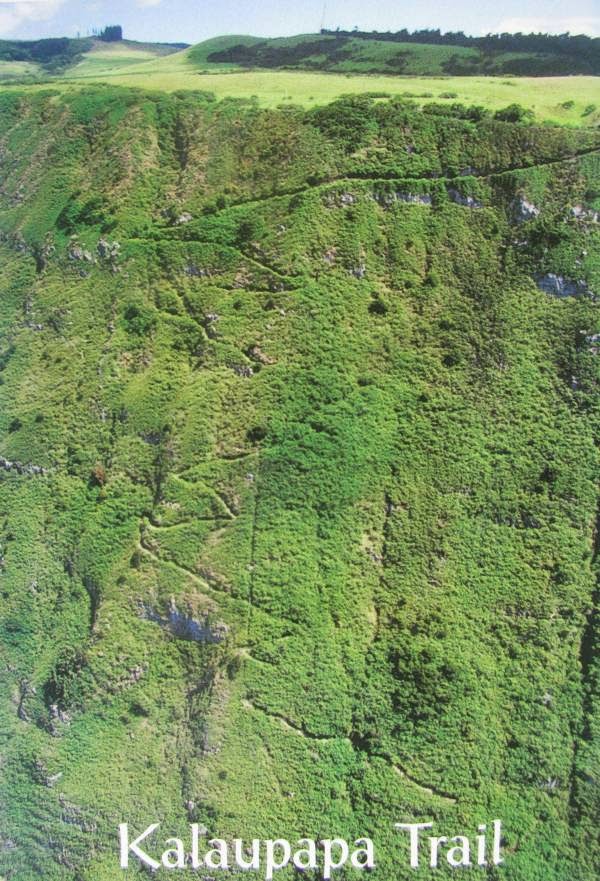 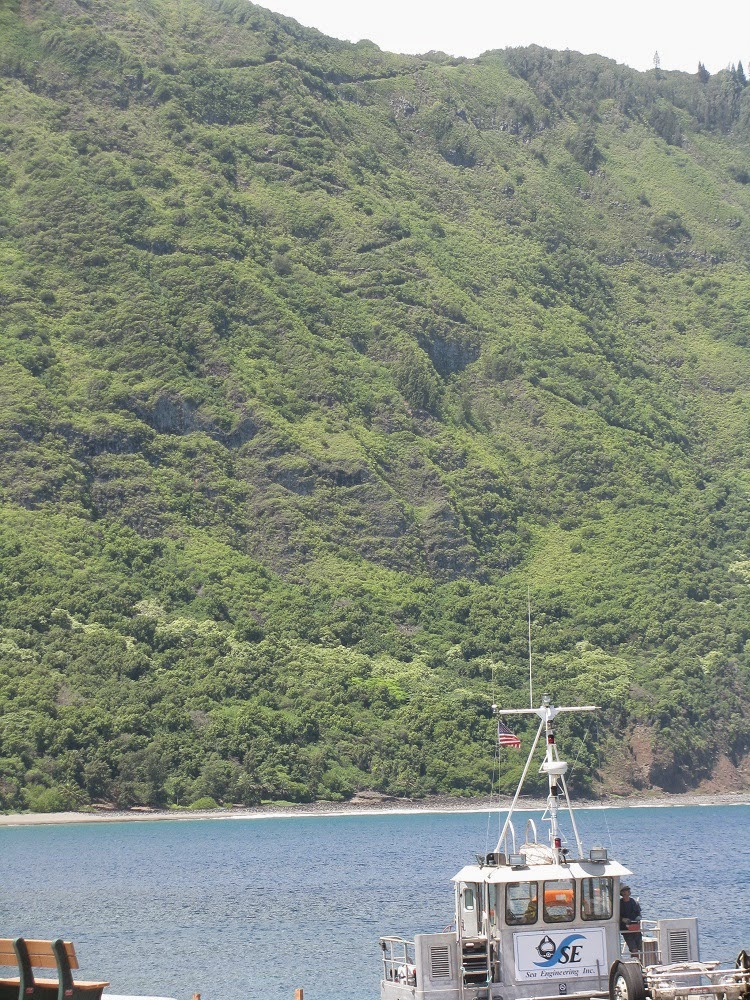 Most people travel this trail by mule, but I've done it four times now on foot -- twice down and twice up. 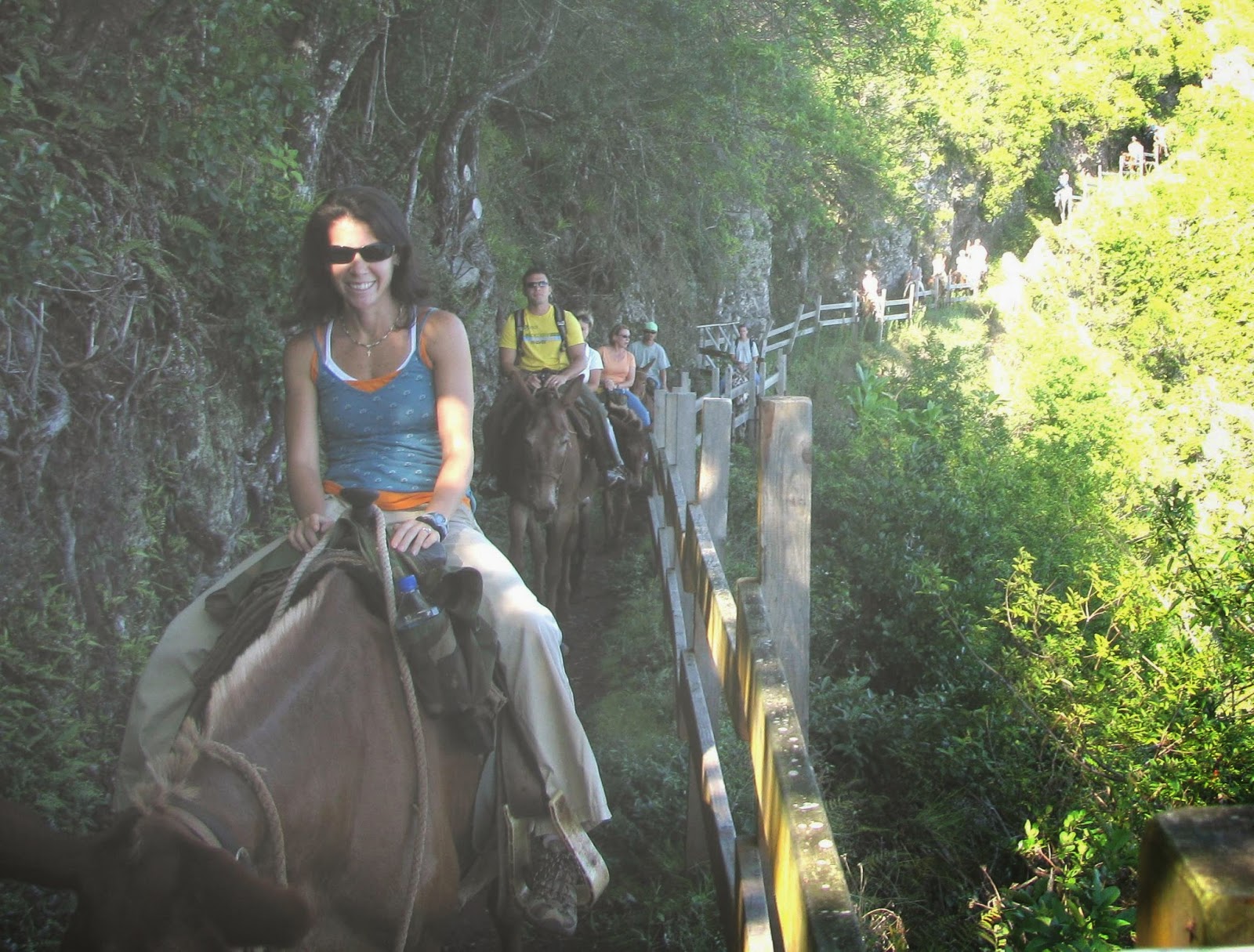 At the bottom, both times, I joined a tour of the leper colony where Father Damien served and ministered to the ill, eventually catching the disease himself and perishing.  He was canonized on October 11, 2009, just a month after these photos were taken:

﻿﻿﻿﻿ I won't extend this post into the other sights and cultural experiences on Moloka'i beyond pointing out my hands-down most authentic Island dining experience - If you stop at only one restaurant on Moloka'i, make it the Kualapu'u Cookhouse - a quaint little spot out in the country where locals gather for music every weekday evening, where the food is Island style with heaping portions, and the service is as laid back as you could hope for: 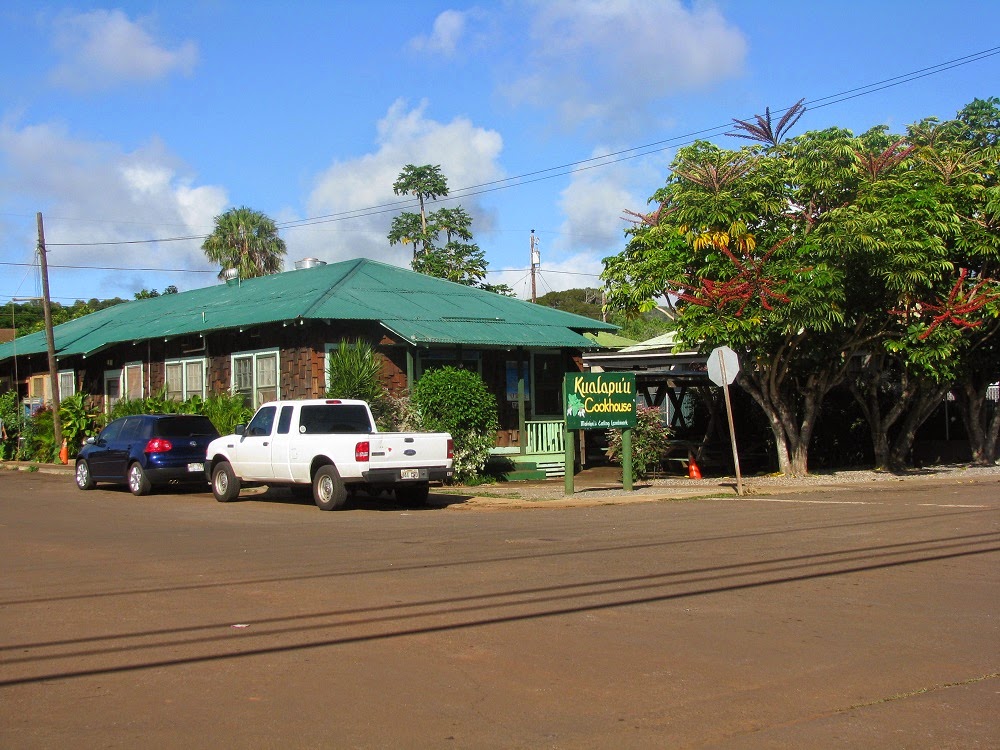 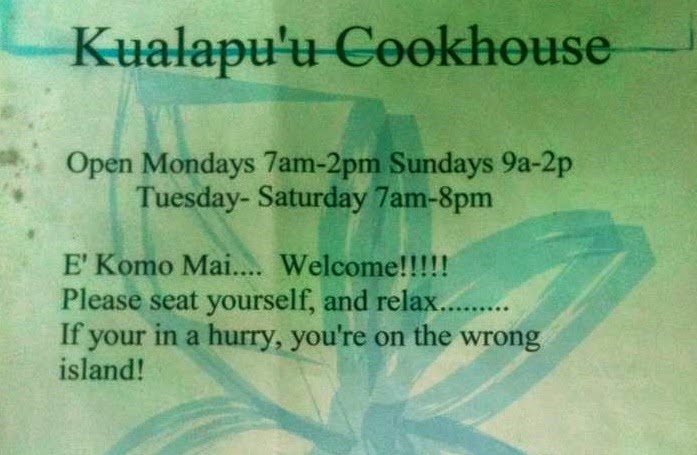 One of the books I found most helpful to understanding the natural beauty of Molokai was this one, chock full of color photos on every page, written by Ph.D. biological researchers who have scoured the island end to end.  My review is below: 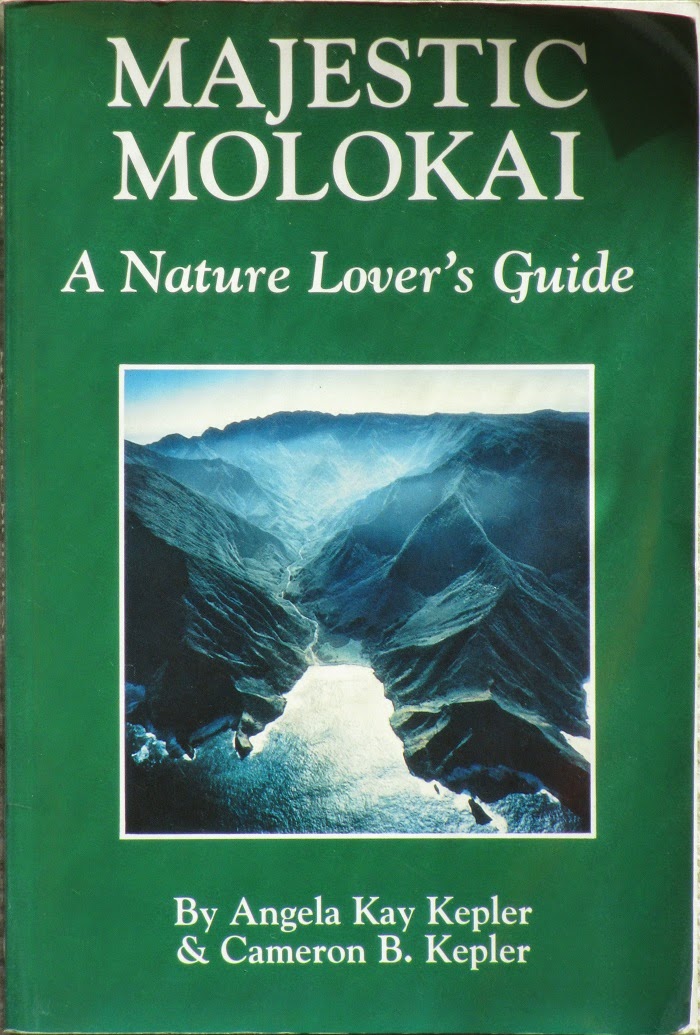 Majestic Molokai: A Nature Lover's Guide by Cameron Kepler
My rating: 5 of 5 stars

This is a coffee table book in the guise of an ordinary trade paperback. It is full of color photos on every page and text written by scientists who have spent a great deal of time doing wildlife surveys on Molokai and other Pacific Islands. They cover the Island end to end, with heavy emphasis on nature, though the culture and people are also featured. It's a fine insider's look at this most Hawaiian of the Hawaiian Islands.

I have spent nearly two weeks on Molokai on two separate trips twenty years apart, and bought this book on the first of these trips. My first hand experience dovetails with the experiences portrayed by the authors in pictures and text. Although the book is dated (nearly a quarter century old now), and therefore does not discuss some of the more recent issues such as the Molokai Ranch water rights and wind farm issues. But as a guide to the island's enduring culture and natural beauty, it's pretty much timeless. If you're thinking of visiting 'The Friendly Isle', especially if you're going to do some exploring, I'd recommend you pick up this book to help with your planning.

View all my reviews
Posted by PJ Wetzel at 9:54 AM