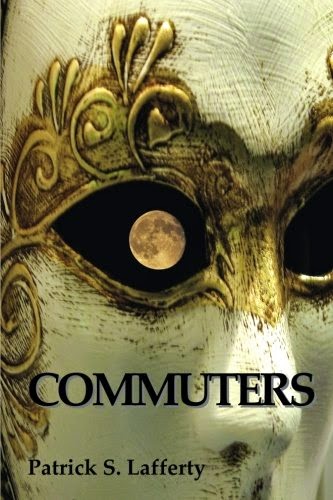 Patrick S. Lafferty has written a first class novel. Were I to categorize it—and that is not my strong suit—I’d call it a Suspense-Thriller-Murder Mystery, or perhaps an Occult Thriller that skims the fringes of both Historical Fiction and Fantasy. But those are only labels. What matters is that this is an engaging, pulse-quickening read from start to finish.

The only difference between ‘Commuters’ and some of the New York Times best sellers that I’ve read recently is that this imaginative, meticulously crafted story is better.

The plot lines of most novels, including the best sellers, have weaknesses that trigger my very sensitive “BS” alarm—that response in me that says ‘not plausible’ or ‘far too contrived.’ ‘Commuters’ triggered this alarm in only one respect: there were too many coincidences. But in response to this, Lafferty has an ‘out’: things are not all what they seem—supernatural forces are at work here. Regardless, for me stories such as these should not be trying to emulate the messy real world. Rather, they ought to strive to heighten reality, thus practicing the time-honored storyteller's art.

I can easily picture ‘Commuters’ becoming a Hollywood blockbuster. As the theater lights dim and the curtain rises, an opening prologue depicts a scene in a king's court from the year 1106 in the southern Iberian Peninsula. It is a ceremony of human sacrifice in the inner sanctum of the aging swart-skinned Sultan of Morocco, Yusuf ibn Tashfin and presided over by his fair skinned sorceress wife Zainab ben Ishaq al-Nafzawiyya. As Yusuf plunges a dagger into the victim’s heart, Zainab invokes the jinn, and these Islamic spirit-entities made of smokeless fire bestow immortality on the aged monarch—a covenant that must be renewed yearly with further human sacrifice.

As the credits finish rolling, the scene shifts to a deteriorating suburban center-town intersection where affluent Mitchell Treadwell, driving by in his BMW, notices his teenage son standing at the busy corner. They meet nearby at the curb and exchange a few inconsequential words. We hear Davis promising to be home in just a few minutes. The camera pans back as Mitchell drives away, then it follows Davis as he pulls his car keys from his pocket and walks into a dark alley, beyond which is a parking lot. A smaller man approaches. Words are exchanged. The man is soliciting sex. Davis refuses and continues toward his car. There is a scuffle, a blunt instrument slams against Davis’ temple and the screen goes dark.

This is how I imagine a screenplay writer might re-envision the opening of the story for big screen appeal. The written word requires a different tack, and it is not until 1/3 of the way through the book that the occult element begins to surface. Instead the book begins with this simple yet captivating sentence:

What follows is the well-crafted and suspenseful action that surrounds and interweaves Davis’ abduction with several recent murders and a tension-filled fender-bender at an urban intersection. We are introduced to the players and the stage. Key characters, richly realized by the author, are Mitchell Treadwell, his police-woman sister-in-law Connie Wysczyzewski, Jenkins, her jerk of a partner, two city detectives named Brown and Watts who are working on three dozen cold-case homicides that they suspect may all be related, a ghetto king-pin named Willie Spence, an old African-American community pillar who everyone calls ‘Uncle Max,’ and a peculiar obsessive suburban ‘road warrior’ named Andy Walker, whose prime goal in life seems to be nothing more than to be a flawless driver during his twice daily 50-minute commute to and from a mundane job across town.

During these introductory scenes we are almost left wondering who the central protagonist is going to be. But it soon becomes starkly clear. The affluent and respected businessman, Mitchell Treadwell, has a secret life. Here’s another quote, words spoken to Treadwell by Connie:

“Sometimes you scare me, Mitch. Greek mythology. Serial killers. You know way too much about way too many things. Way too many creepy things.”

What follows is a heart-pumping page turner of the first magnitude as Mitchell seeks to learn the fate of his son—a fate that he may have inadvertently caused. I have not recently read a book that kept my attention more riveted as the deftly crafted plot unfolds and the unexpected entanglements reveal themselves. Highly recommended. Tell your friends.
Posted by PJ Wetzel at 9:31 AM