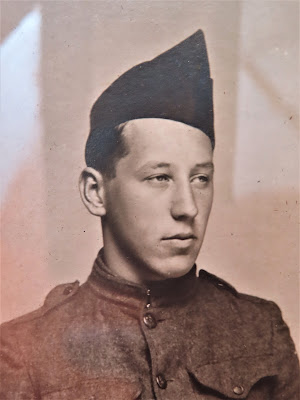 George Gustav “Dutch” Auler was born on December 21, 1899. When the US entered the Great War in early 1917, he was only 17 years of age. The war in Europe was the dominant subject of conversation, and Grandpa decided to enlist in the army even before the US formally declared war on Germany on April 6, 1917. Grandpa enlisted on March 3rd, lying about his age to get in. He was 17 years, two months, and thirteen days old.

At the time the US Army had only 127,151 soldiers in uniform. Compare that with the German army’s 11 million. The US needed lots more bodies in uniform fast. So since not nearly enough people were enlisting fast enough, a new draft was enacted into law on May 18, 1917.

The draft had a shady history in the US. There had last been conscription in the Civil War, but it had loopholes that allowed rich people to pay somebody to take their place. That’s how my great Grandmother’s brother, Lewis G. Butzow, newly immigrated from Germany, joined the civil war. He wasn’t even a citizen yet. But a kick-start in this new country in the form of $250 cash from some rich man seemed like it was too good for him to pass up. He served honorably. But let’s get back to the current story.

The US was ramping up its war infrastructure at a frantic pace, opening and expanding boot camps around the country. Grandpa Dutch was called into the army in one of the first waves of call-ups, on June 20th, 1917, and after a short stop at Camp Douglas in Wisconsin he was sent to boot camp at Camp McArthur in Waco, TX. Here, in his own handwriting, is an autobiographical sketch of the events: 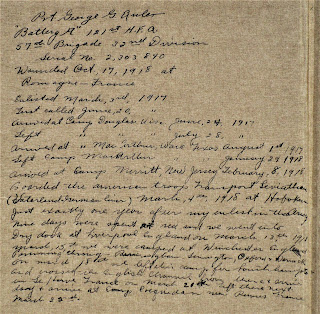 He left this bio unfinished. We have a photo of Grandpa Dutch and three colleagues/friends taken at Renne right around the 22nd of March 1918. The caption is in his own handwriting.
So where was he during the war? Grandpa rarely talked about the war, but he kept photos such as the one above, and was given (and kept) two history books about his unit. It is on the inside front cover of one of these that his incomplete bio above is written. The history books tell us that he was in the midst of the action on the western front–a trench-warfare line that stretched all the way across France. But best of all, we have a few of his letters, sent from the front lines to his sister Marie. And Marie saved them.
These letters provide no explicit detail of his activities. The censors did not allow that. But he describes being at 5 different ‘Fronts’. He talks about friends who were wounded, and how his best friend in the army was killed. And he talks explicitly about the conditions he was facing, such as ten-days of hard marching with a hole in one of his boots. I’m including two of the letters here; and I’ll let his own words speak for themselves. One letter was written just two weeks before he was wounded (we don’t know what the wound was), and just five weeks before the end of the war, 104 years ago today. The other letter describes his decorations and plans to return home in May of 1919. I’ve supplied a page-by page transcription, since his handwriting is sometimes a bit tough to read. 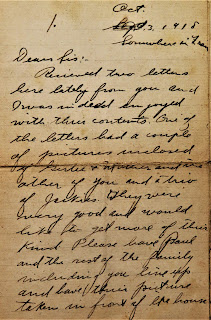 Oct. 3, 1918
Somewhere in France.
Dear Sis:-
Received two letters here lately from you and I was indeed enjoyed with their contents. One of the letters had a couple of pictures enclosed of Gertie and (Walter?) and the other of you and a trio of (Jackties?). They were very good and would like to get more of their kind. Please have Paul and the rest of the family including you line up and have their picture taken in front of the house 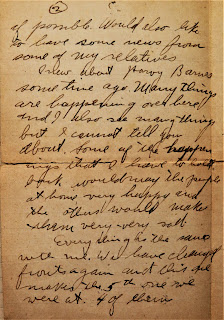 if possible. Would also like to have some news from some of my relatives.

Knew about Harry Barnes some time ago. Many things are happening over here and I also see many things but I cannot tell you about. Some of the happenings that I have to hold back would may (make) the people at home very happy and the others would make them very sad.

Everything is the same with me. We have changed fronts again and this one makes the 5th one we were at. 4 of them 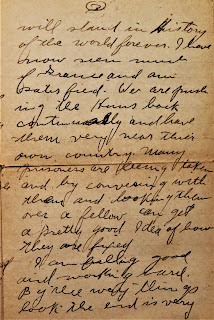 will stand in History of the world forever. I have now seen much of France and am satisfied. We are pushing the Huns back continually and have them very near their own country. Many prisoners are being taken and by conversing with them and looking them over a fellow can get a pretty good idea of how they are fixed.
I am feeling good and working hard. By the way things look the end is very 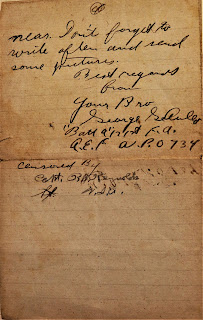 near.  Don’t forget to write often and send some pictures. 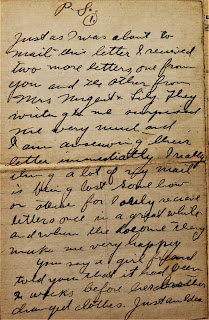 Just as I was about to mail this letter I received two more letters, one from you and the other from Mrs. Nugent & Lily.  They writing to me surprised me very much and I am answering their letter immediately.  I really thing (think) a lot of my mail is being lost somehow or other for I only receive letters once in a great while.  And when the (they) do come they make me very happy.
You say a girl friend told you that it had been 2 weeks before her brother changed clothes.  Just an idea 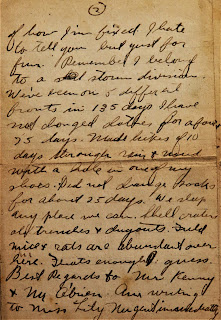 of how I’m fixed. I hate to tell you but just for fun. Remember I belong to a storm division. We’ve been on 5 different fronts in 135 days. I have not changed clothes for about 75 days. Made hikes of 10 days through rain & mud with a hole in one of my shoes. Did not change socks for about 25 days. We sleep any place we can. Shell craters, old trenches & dugouts. Field mice & rats are abundant over here. That’s enough I guess.
Best regards to Mr Kenny and Mr O’brien. Am writing to Miss Lily Nugent immediately.
(End-of-letter) – Here’s the second one: 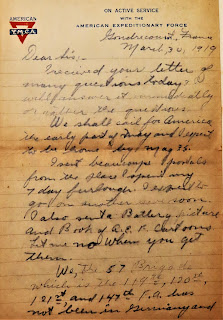 I received your letter of many questions today. I will answer it immediately or rather the questions.

We shall sail for America the early part of May and I expect to be home by May 25.

I sent beaucoupe postals from the place I spent my 7 day furlough. I expect to go on another leave soon. I also sent a Battery picture and Book of A.E.F. cartoons. Let me no (know) when you get them. 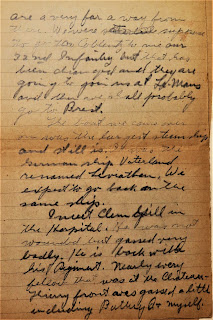 are a very far away from there. We were suppose to go to Coblentz to me (meet?) our 32nd Infantry but that has been changed and they are going to join us at Le Mans and then we shall probably go to Brest.
The boat that we came over on was the largest steamship and still is. It was the German ship Vaterland renamed Leviathan. We expect to go back on the same ship.
I met Clem Gill in the Hospital. He was not wounded but gassed very badly. He is back with his Regiment. Nearly every fellow that was at the Chateau-Thierry front was gassed a little including Battery A & myself. 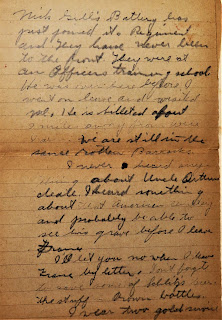 Nick Gill’s Battery has just joined its Regiment and they have never been to the front.  They were at an Officers training school.  He was over here before I went on leave and visited me.  He is billeted about 2 miles away from were (where) I am.  We are still in the same rotten Barracks.
I never heard anything about Uncle Arthur’s death.  I heard something about that American cemetery and probably be able to see his grave before I leave France.
I’ll let you no (know) when I leave France by letter.  Don’t forget to save some of Schlitz’s beer.  The stuff in brown bottles.
I wear two gold service 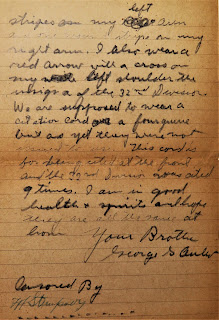 stripes on my left arm and one wound stripe on my right arm. I also wear a red arrow with a cross on my left shoulder, the insignia of the 32nd Division. We are supposed to wear a citation cord over a four queue (?) but as yet they were not issued to us. This cord is for being cited at the front, and the 32nd Division was cited 9 times. I am in good health and spirits and hope they are all the same at home.
Your Brother
George G Auler
Censored by
FH Steinpatz (?) 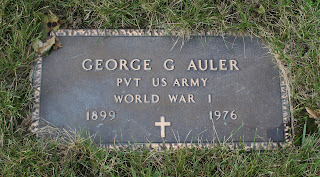