On returning from Switzerland - New plans and Inspirations 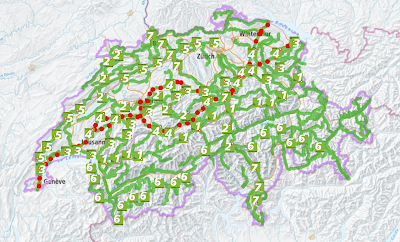 The stationary life at the Monastic Retreat at the Cloister has brought great rewards, but these roving feet have hiked long distance trails for a decade - 20,000 miles worth, and Europe exposed me to its astounding network of connected trails, many of which have been Pilgrimage routes for over a thousand years.

It begins to feel as if the Pilgrimage will become an integral part of my ongoing quest to reveal my personal path to 'Salvation', that is Peace of Mind, and Eternal Life, which a number of faith traditions insist can be experienced during one's physical mortal lifetime. I am of that belief, and realize that I have often come close to this perfect state of being, most often when my feet are on the move, hiking through the glory of some natural setting.

Yes, a day hike can be a pilgrimage. There will be more emphasis on that. But at the same time I've gained a great deal of clarity of thought through connecting the teachings of the Judeo-Christian traditions with several more ancient ones, particularly the teachings of Lao-tzu.

Lao-tzu is said to have lived in China around 600 B.C., during the 'Axial Age' or the 'Age of Transformation'—a time when civilizations world-wide were coming to a new awareness. It was the period when most of our great organized faiths were founded.

In the introduction to his 1988 translation of the Tao Te Ching, Stephen Mitchell writes of Lao-tzu:

"People usually think of Lao-tzu as a hermit, a dropout from society dwelling serenely in some mountain hut, unvisited except perhaps by the occasional pilgrim. But it’s clear that he deeply cared about society, if society means the welfare of one’s fellow human beings.

"Lao-tzu teaches that ‘The Master’ is one who masters Nature, not in the sense of conquering it, but of becoming one with it. We find deep in or own experience the central truths of the art of living, which are paradoxical only on the surface: that the more truly solitary we are, the more compassionate we can be."

Well said. I believe these words reflect my experience over the past year and a half, since walking away from society and into the woods.

I now care more deeply about the society from which I sprang, about the direction it is going, and about how we can build a better future for our descendants. "I need a house" a voice once said to me; and one interpretation of that is to make our planet a safer 'Haven' and shelter for the coming generations. Many more thoughts on this to come. Stay tuned.

One of the options I am considering for my return to Europe, as mentioned in the video is a pilgrimage from my ancestral points of Origin, via the Way of St. James, to the Cathedral at Santiago de Compostela and then on another 70km to the 'End of the Land' at the Atlantic Coast of NW Spain.
I'm very unusual for an American in that every one of the ancestral roots of my family tree is found in one small area of what was once Prussia, now divided between Mecklenburg-Vorpommern in northeast Germany and adjacent northern Poland.  One ancestor was born in what is now the Russian enclave of Kaliningrad Oblast on the Baltic Sea coast of Russia, just across the border from northern Poland.  All these areas were part of greater Germany at the time my ancestors lived there, and they were all ethnic Germans.  My family didn't get the memo about America being a 'melting pot' of diverse cultures, though the next generation definitely trends in that direction, including Norwegians and Scots in the mix.
Here is a map of that small region of former Germany/Prussia/Pommerania where all my ancestors lived before emigrating to the US.  The map includes the local Way of St. James pilgrimage routes. 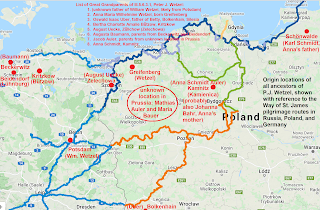 And here is one idea for a future long distance hike across Europe--following one of the many 'Way of St. James' pilgrimage routes across Europe. 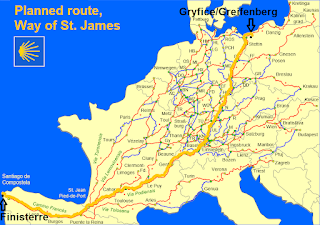 Just look at that network of trails!  Each of them is marked, usually with the scallop shell symbol that indicates that it is a Way of Saint James pilgrimage route (the example below is in Poland) ... 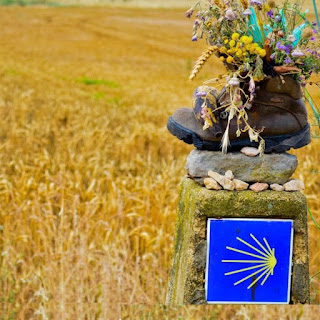 ... and each of them provides accommodation, churches of refuge, and hostels for the pilgrim along the way.  Many of these routes have been in continuous use by pilgrims for more than 1000 years.  Here is a particularly good example of a bit of well-worn trail near Fribourg in Switzerland: 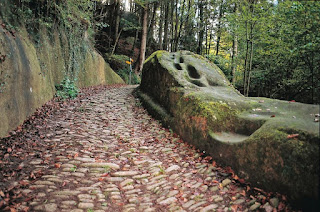 The infrastructure along all these routes is astounding, and there is nothing comparable in the US.  If only ...
Well, for me a Pilgrimage is more about connecting with the living things of the wild world than about connecting with fellow humans who are rooted in the Judeo-Christian faith tradition.  We'll see how my thinking evolves, but going back to Europe to hike seems an inevitable future prospect.
Thoughts never stand still, except when they're written down.  (That's why the written word and the recorded video, etc., are such inadequate and flawed media.)  I will be reporting how things evolve as new directions emerge.