Footprints in the Wilderness 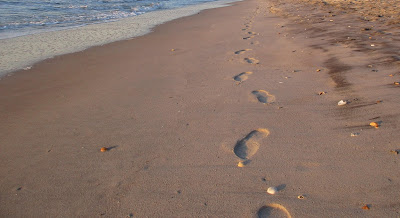 It was a peaceful afternoon nap.  I dreamed I was back in the house I grew up in—the one I lived in from when it was built in 1958 through 1966.  It was empty, of course.  Everybody who lived there but me has passed on.  The house itself has passed on, with only its deepest bones remaining as part of a total rebuild and expansion.

Only me and the old bones.  It was a lonely place.  Yet full of peace now.  Everything had settled.

It was dusk.  A strange hazy dimness hung in the air, like the light coming in under a thunderhead at sunset.  Kids and young folk were frolicking down in the meadow beside the noisy creek, living their strange sort of 'game-lives', the way kids do, half of it virtual.  They were on a different wavelength.

Even in the dream I was lying in bed dreaming.  Not even in my own bed.  This hadn't been my house for more than fifty years.  I was inside a dream of a house.

How could that be?  The electricity was off.  Only the dim twilight outside provided a little light.

Jolted from a sound sleep, I hurried to yank on a pair of shorts.  Dream shorts.  I couldn't get my legs through.  Finally I pulled them on and ran to the door, still snapping them, pulling up the zipper.

Who could be there?  Who knew I was here?  The young folk out in the meadow below weren't interested in this old ghost of a place or anybody in it.

I opened the door to find … well, Tolkien would have called it an Ent.  An animated tree, a creature older than time, full of deep wisdom and memory, with a long dangling beard covered in leaves and moss and lichen.

"Huh?"  I remembered that I had better soon decide what I wanted to do, now that I had finished hiking to every place I'd ever lived, including this one, the only one of the twenty-one that had been torn down and survived only as a memory.

"Do?" the old spirit harrumphed.  "Then why am I here?  Doing is what those youngsters are about.  Doing is putting off being.  What do you want to be, old man?"

"What is there left to be?" I answered his question with a question, thinking that was a pretty clever dodge.

He sort of posed before me, his eyes opening slightly wider, spreading his bony, leafy, twiggy hands outward, just slightly.  It was a non verbal "I'm here.  Being has brought me here. You brought me here.  So isn't this what you want to be, really, when you get right down to it?"

"But I love where you come from.  You're a spirit from a world before humans, pristine, natural.  A face of the forest, a voice for nature.  All the places that I love are reflected in those deep green eyes," I said.  "The wilderness."

"So … I want to be that.  The wilderness.  A tempting rocky summit, a canyon that twists away into mystery.  A selfless thing that belongs deep in a green misty glen beside a waterfall.  Or traipsing a lonely beach under the great dome of the firmament, surrounded by surf, wind, salt, sky, rain."  Then a thought struck me, and I blurted "I want to be footprints."

"Footprints?  Hmmmm … A path to follow, perhaps.  For those who come after?"

"Not even that.  Just the knowledge that such a path exists.  That there is a way that can lead folk back into the wild, a way that is warm and comforting, full of enrichment, understanding.  Joy."

He laughed.  His delight vibrated out like ripples on a pond, pushing back the twilight gloom, surrounding us with a glowing cocoon of warmth.

"Are you ready, then?" he asked, turning to go, eyes fixed on me expectantly.

Behind me was an empty, silent house, built of no substance, containing nothing that I needed to bring with me. 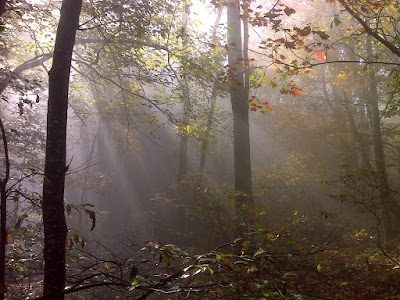 … and the identity of PJ Wetzel dissolves into the wilderness …