Back on the North Country Trail, Slippery Rock Gorge to the Ohio Line 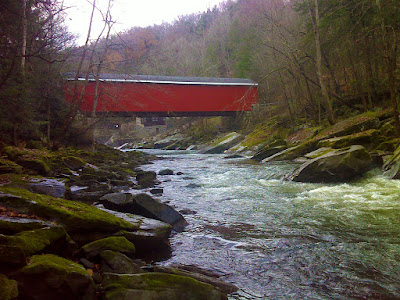 It was late June and I was out in western PA hiking westbound on the North Country Trail, when Dad went into the hospital with his final illness.  By Thanksgiving family affairs had settled and Mom was adjusting well to her new situation, so I thought I'd head back out and see how far I could get before winter drove me into hibernation.

Back in June I had just finished hiking Moraine State Park, near New Castle, PA, and was ready to hit nearby McConnell's Mill State Park where the trail traverses the deep narrow gorge of Slippery Rock Creek, passes the namesake mill, and takes the hiker right through the adjacent covered bridge.

My first day back was a typically dreary one for late November in western PA.  But the cloudy sky and intermittent drizzle didn't dampen my joy at being back in the woods.  My spirits were as bright as this sunny fungus. 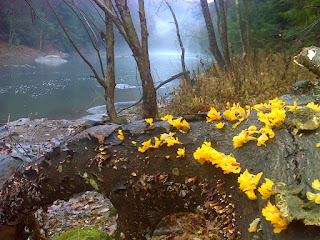 The trail climbed and descended.  Sometimes I was high up on the bluffs, but without views of the stream,  Other times, and those were the best ones, the trail kept me right beside the water. 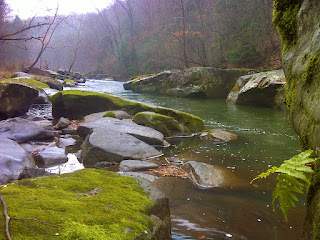 Yes, the rocks were slippery.  But somebody got a few of them to work together as if they were coated with glue rather than slime. 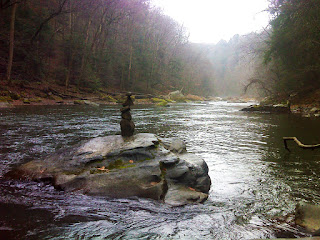 There were about seven miles of trail in this small park, so by late in the day I was out doing a road walk, headed through the trail towns of Wampum and Darlington and toward another rendezvous with real foot trail in the woods.

Beside a roadside pond, I encountered a delightfully clever sign.  It spells a word, a familiar name to be precise, and the eye naturally translates when it views the sign straight on.  Can you tell what it says?  If not, I'll provide a couple of hints at the end of this post.* 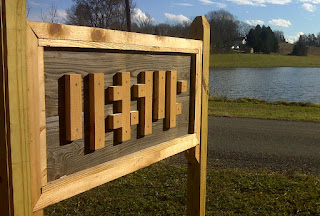 The next section in the woods follows a branch of Little Beaver Creek out of Darlington. 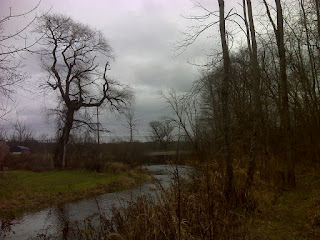 It then passes through some recently timber-harvested forest, but eventually returns to a wild setting along the creek with some wonderful walks atop bluffs with sheer drops down to the water.  In the photo below, the trail is in the thick hemlock stand right at the top of the cliff. 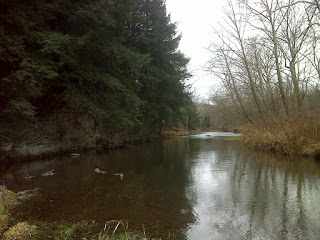 Much of this country was strip mined for coal long before the era of modern regulation.  Since then much of the damage has been left to heal naturally.  Forest has reclaimed most of the land, but the odd mix of level strips and steep slopes makes for unusual hiking.  One of the level spots, one with a decent view, has been selected by the Wampum Chapter of the North Country Trail Association (NCTA), as the site for a brand new shelter.  When I passed through it was under construction, with only the floor completed to date. 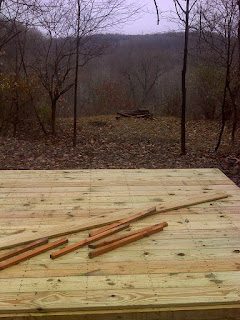 It only took me four day-hikes to get to the Ohio Line. This is the eighteenth state that I've now connected with a continuous string of my footprints.

The character of the trail changed when I got into Ohio.  The first off-road section follows an old railroad bed beside a designated 'wild and scenic' river.  The steel tracks had been removed, but not the wooden ties. 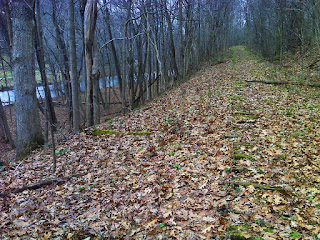 I'm guessing that Ohio trail builders focus mostly on their state-encircling trail, the Buckeye Trail.  Coming out of PA, the North Country Trail eventually merges with the route of the Buckeye Trail, but to get to it there are a few dozen miles of 'orphan' trail that seem rather neglected.  Besides the railroad bed, this orphan section has only two short bits of foot-travel-only woods trail.  One is on private land, and is not 'certified' by North Country Trail's governing authority. 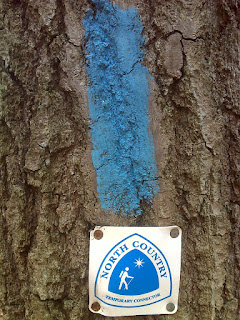 The other is much nicer, but is only six miles long.  It's in a state park; and I'll cover that in my next post.  The NCTA doesn't even publish a map of the rest of the connecting route, all on roads.  Worse, the road segments are poorly blazed where they are blazed at all.  I'm looking forward to getting through. 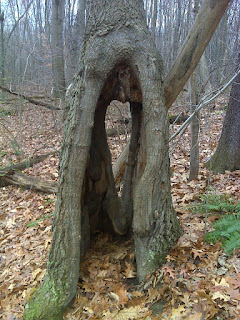 If only it was as easy as slipping into a portal in a magic oak tree.

Below are the GPS tracks of the four hikes that got me to Ohio.  They're arranged from east on top down to west (and the state line) at the bottom. 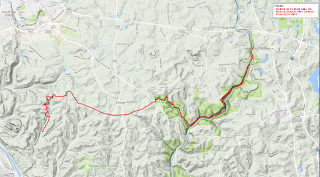 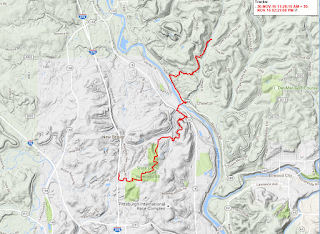 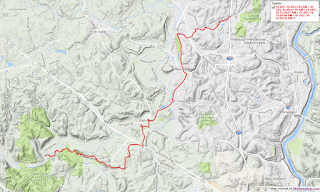 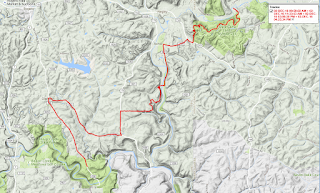 *Hint to translating the sign:  The negative space forms the letters.  We celebrate his birthday very soon, Dec. 25th.