My Dad passed away quietly and peacefully on the morning of July 20.  He was 93.  He lived a full and remarkable life, leaving nearly all those he touched better for having known him.

Dad's sojourn through this world is an impressive story.  No less elegant was his passing.  He was comfortable with dying.  He faced it without fear.  Yet he squeezed every ounce out of his failing body in the last three weeks.  He would not give up on life because life is an adventure, and that adventure included full immersion -- no shortcuts -- in the dying process.

It was no less an adventure for me, and I feel blessed to have shared it with him.  He had surgery in early June.  A series of setbacks followed, but they were not a direct result of the surgery.  It was clear that his body was simply failing.

The Germans call it Altersschwäche, weakness of old age.  No one thing killed him.  His heart, circulation, lungs, and digestive system just slowly shut down.  He was conscious and communicative up until the last few days and aware of his surroundings and the words of those around him up until the last twelve hours.

Since he came home from institutional care on July 1, he did not complain about pain or discomfort.  Not once.  He greeted everyone with a broad smile.  He reached out his hand to all who came to him, and held them up to God.  He offered prayers of thanksgiving for family, for friends, and for the aides that helped us care for him.  He was where he wanted to be.  He was the author of the final chapter of his story.  He knew it and he made the most of it.

When it was time to go he simply stopped breathing.  Those last breaths were shallow but there was no gasping, no desperation, no struggle.  He simply passed across the threshold, taking his spirit to the other side, and was gone from our sight.


And so now it is time for those of us left behind to celebrate the rest of his life. 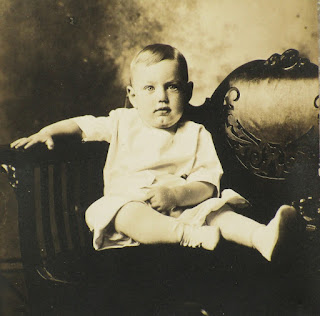 Dad was born in Hartford, Wisconsin to a German immigrant journeyman cabinetmaker and the daughter of a German immigrant farmer-homesteader.  He was the youngest of three boys, the tag-along, the odd one out, the little brother who couldn't keep up. 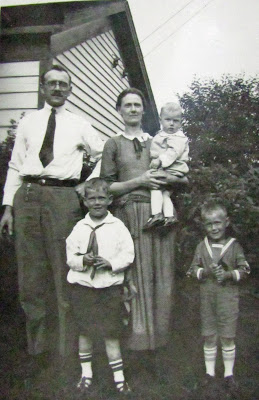 That sibling dynamic was to have an impact on the course of the rest of his life.  I know this because he spoke of it many times.  He had to struggle harder to prove his worth.  It established a mindset that led him to excel.  It is why he earned a PhD.  It is why he holds a number of patents.  I believe it is one reason why he outlived his two brothers by fifteen years or more. 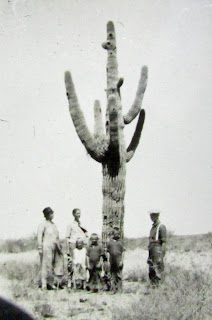 In 1928 the family took a pioneering cross-country tour from Wisconsin to the Pacific Ocean and back.  The fabled US Route 66 had just been completed, and driving it had become all the rage.  They made the trip in an old Buick Brougham.  I've tried to identify the specific model and year without success. 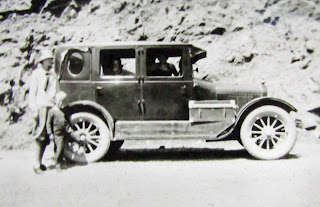 During college he and a good friend took an epic 500+ mile bicycle trip across Wisconsin from Milwaukee up to the 'North Woods' near Rhinelander. 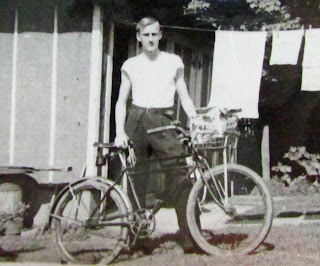 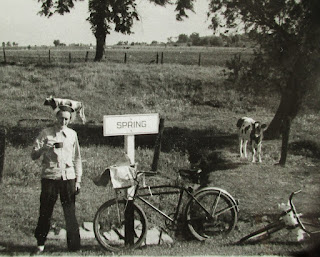 A few years later he met the love of his life, Muriel, who was to become his wife of 71 years.  The war was beginning.  He joined the Navy V-12 program halfway through college. 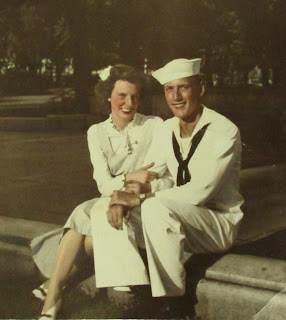 He was valedictorian of his V-12 graduating class.  The speech included words that seem as appropriate today as they did then in the midst of those dark days of uncertainty. 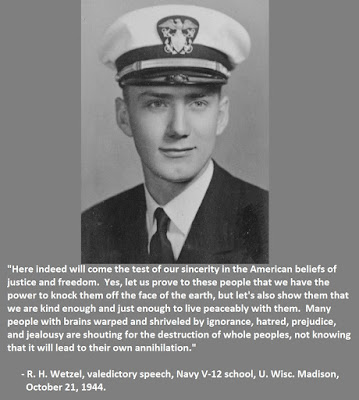 After earning the B.S. the Navy sent him to Midshipmen School at Columbia University where he was commissioned Ensign.  Before heading off to his freshly constructed ship, he and Muriel were married. 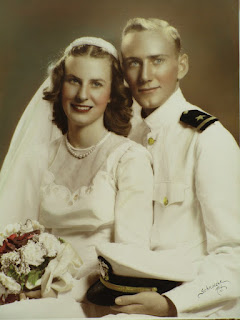 The ship was of the heavy cruiser class, the USS Oregon City.  It went on its shakedown cruise out of Gitmo - Guantanamo Bay, Cuba.  Then the war ended.  The ship never saw action and was mothballed shortly thereafter.  It sat in the Philadelphia Naval Yard until the 1970s and was eventually sold for scrap.

Dad was given an honorable discharge on June 1, 1946.  He went back to school under the GI Bill and earned a PhD in Chemical Engineering.  He went to work for DuPont in Wilmington, DE on September 1, 1951 with a starting salary of $480 per month, and remained there until his retirement in 1978.


Among his many accomplishments he contributed to processes for refining pure silicon - a vital step in ushering in the computer age.  He earned several patents.  This one is held solely in his name. 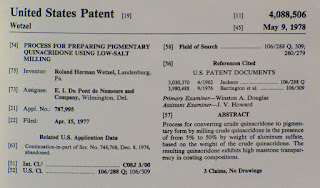 My personal memories of Dad begin about the time he took that job.  We lived in two rented places while we shopped for some land in the country.  We bought six acres on White Clay Creek, now a designated 'Wild and Scenic River', near Landenberg PA.  There Dad personally designed and drafted the plans for his dream home, and he personally constructed the bridge across the creek using only a 1951 Willys Jeep Wagoneer and rope pulleys to hoist the I-beams into place. 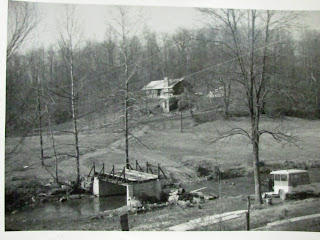 Nearly every summer we returned to Wisconsin to visit family, and often we would return to the 'North Woods' at Hunter Lake, Vilas County, west of Conover where we would have family reunions and enjoyed fishing and boating.


One of those vacations included the Boundary Waters canoe trip where I took the headline photo.

I always idolized Dad.  He got a PhD so I determined to get one too.  He designed his dream home, so I did too.  I went the extra step and also built the house myself.  I wanted a stone house, but it was taking forever.  I had started it in 1976.  In the summer of 1980, Dad joined me in the Colorado foothills and worked with me for a month to finish it. 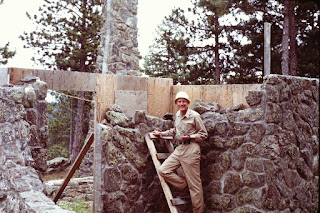 This was another of the wonderful times of father-son bonding, memories more precious than rubies.

When I moved back east from Colorado our family reunions took place at the beach in North Carolina.  Eventually we chose Topsail Island.  Dad and Mom rented a cottage there every May and invited family to join them for two weeks.  I fell so much in love with Topsail Island that I bought my own condo there.  Dad's influence once again.

It seems that as the years went on and Dad aged I only idolized him more.  We enjoyed many deep philosophical conversations starting when I was a brash and rebellious teenager.  Back then I knew I was right.  Dad had no clue.  By the time of our last conversations I had fully come to appreciate and savor his wisdom.

Dad was always a man of God.  He was active in the Avondale Presbyterian Church for nearly sixty years and served there as an Elder.  He carried his faith quietly and humbly, evangelizing by example rather than words.  There's a story from his last weeks that exemplifies this.  While in the hospital he had need of a nurse so he rang the nurses' station using the bedside call button.  When no nurse responded he pushed the button again, and several more times, still with no response.  Finally a nurse stormed into the room and proceeded to 'chew him out' for what seemed half an hour.  After a time Dad reached out and took her hand and began a prayer.  He asked God to forgive him for his impatience.  He thanked the Lord for the care that she was giving him.  And he asked God to bless her for her service.

In that moment the nurse's attitude turned 180 degrees.  All the anger and tension in the room disappeared, replaced by love.

From that moment on until the end, Dad would take the hand of every new caregiver who came to his bedside, and he offered a similar prayer.  I was there for many of those prayers and thought them remarkable.  They were so selfless and sincere.  Yet I had not known the full story until after he told it to a visiting retired pastor and neighbor.

Right up to the end Dad was more concerned for those around him than for himself.  Every day he would ask how Mom was doing.  Whenever I came to give him medications he would take my hand and thank me.

Dad was one of a kind.  Irreplaceable.  And yet there is no need of replacing him.  His legacy lives on in the hearts of all who knew him.
Posted by PJ Wetzel at 3:06 PM