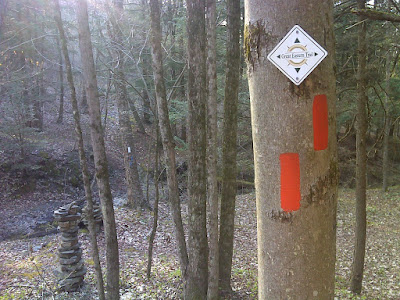 On April 13th I stepped onto the Great Eastern Trail at the C&O Canal Tow Path in Maryland.  Today, May 11th, I reached the northern terminus, taking just two 'zero days' along the way.

The Great Eastern Trail sells itself as a much quieter alternative to the Appalachian Trail--closer to nature, farther from the 'Madding Crowd'.  That it is.  The trail seems almost unused in places.  In one register I counted exactly ten entries in the last seventeen months, including mine.

I missed a lot of the middle part, including almost everything from North Georgia to the C&O Canal.  I also deviated from the Great Eastern Trail in order to hike the length of the Grand Canyon of Pennsylvania.  But many of the parts I hiked are memorable and, for me, more enjoyable than the Appalachian Trail.   The segments I most enjoyed were the Alabama Pinhoti Trail and Pennsylvania's Standing Stone Trail.

As far as these last six days, I enjoyed the four miles of trail along the north shore of Lake Cowanesque in far northern PA the most.  There are a dozen or more benches with views like this. 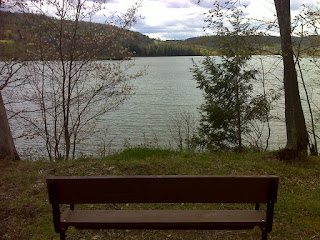 The entire four miles is full of variety from woodland to open grassy meadow.  There's an old railroad bed that rises out of the lake, then you walk the streets of the ghost town of Nelson, also relocated when they dammed the valley.  You wouldn't know it was a street unless you notice the slabs of sidewalk on in the woods beside you.   All the houses are gone, though the proud cemetery still sits high on a hill behind.

I crossed the State Line on a road walk, leaving the Mid-State Trail and joining the Crystal Hills Trail, a spur of the Finger Lakes Trail that the G.E.T. organization is working to complete. 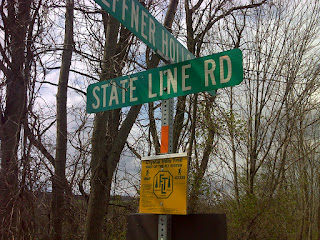 There wasn't much dedicated footpath, except for Pinnacles State Park.  Then the trail passes through historic Addison, NY.  Here's Main Street. North of Addison there's about a ten mile gap to Erwin, with no blazed route, so I went my own way, resuming the trail where it finally plunges into the Woods at Erwin Hollow.  From there the trail gets into New York's patchwork of State Forests and there's plenty of quiet off-road trail, much of it through reclaimed farm land.  Here's evidence in the form of a sturdy old stone fence. 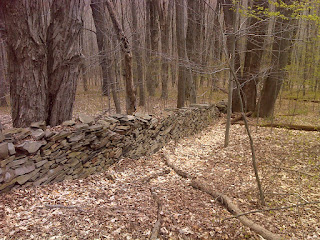 Like the Mid-State Trail, the Crystal Hills Trail is blazed orange.  It seems the maintainers enjoy their work. 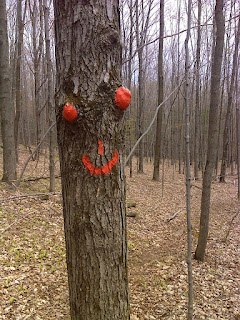 For twenty seven days I've been heading north.  I'm almost at 42 1/2 degrees North and it's nice to have the long hours of daylight.  Now I'll be heading west on the white blazed Finger Lakes Trail, which eventually will return me to Pennsylvania.  More reports to come.

Here's the series of daily maps of my track.  It begins on Day 23 with the last piece of the Pine Creek Rail Trail, and a 9.5 mile road walk to the M.S.T. and ends with a few miles of Finger Lakes Trail proper on Day 27: 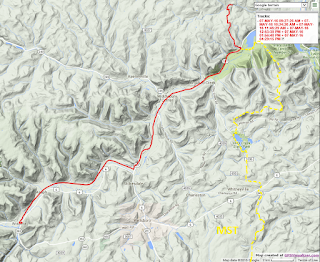 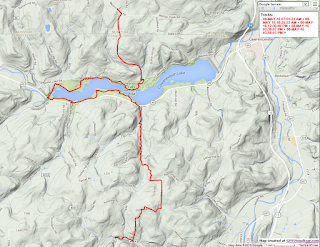 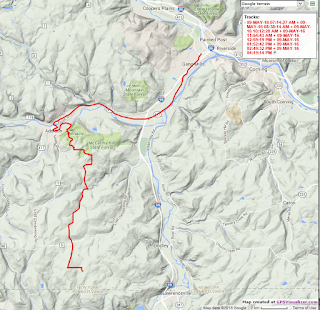 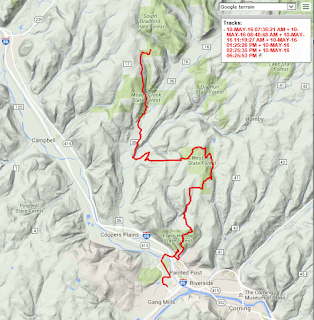 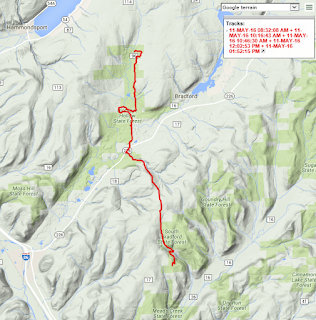