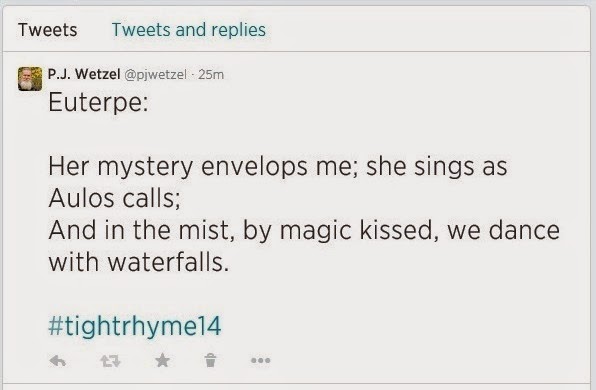 ﻿
It's been a long slow evolution - my relationship with Twitter.  I'm sure I still don't actually 'get' it.  But I've found a niche--a challenge really.  And it is this:

I love writing very short poetic couplets in a style made popular by the likes of Alexander Pope back in early 18th century England.  I call them 'Tight Rhymed Fourteener Couplets' and I've blogged about them before.  In fact, this is by far the single most viewed post of all time here on this blog.

It's called a Fourteener because each line of the couplet is made up of just fourteen syllables with seven 'feet' or 'beats' using a style called 'Iambic Heptameter.'  And I call it 'tight-rhymed' because in addition to a rhyme that links the two fourteen syllable lines at the end, each line has an internal rhyme at beats two and four.  Okay, enough technical talk.  Check the post linked to above for more description and examples.

An exciting (for me) epiphany happened about six weeks ago when I started working on a light-hearted rhyme honoring the poetic achievements of Dr. Seuss.  The project took an unexpected turn when I realized that these tight little poetic gems usually meet the 140 character limit required as a tweet.  Here is how that whimsical rhyme turned out--somewhat of an ode to Twitter:


Fed Dr. Seuss some Twitter juice.  A silly song he sung
As viral toads on spiral roads snatched Hashtags with their tongues.﻿

As you can see in the example up top, I can usually also fit a title and my chosen hashtag, #tightrhyme14 within the Tweet.

For me this is great fun, but it's also a good way to stretch those writing muscles.  It's a serious challenge to fashion 140 characters of prose into 'Flash Fiction'.  Good flash fiction tells a complete story while leaving much territory for the reader's imagination to roam.  And, of course, the added challenge of incorporating rhyme and meter makes it quite a mind-stretching exercise.

Here's another 'Flash Fiction' Fourteener - this one in the Sci-Fi genre:

Instead of telling a story, a good Fourteener couplet could be like a proverb--a self-contained gem of wisdom.  Here are a couple of examples I recently tweeted:


When fire meets wood enduring good will scatter with the smoke.
Yet light from heat we gladly greet—The truth that Sages spoke #tightrhyme14
﻿


The primal seed must yield, by need, this one empow’ring thought:
When self-aware, our thought or prayer is why the seed was wrought.

If you are looking for more of these ... well, try my seven-book epic Fantasy/Sci-Fi novel series 'Eden's Womb'.  It features one of these Fourteeners as an epigraph at the start of each of its more than 300 chapters.  An epigraph presages or comments on the content to follow.  Here's a pair of them, which introduces Book One, 'The Return of Naja'.  Naja is a long-missing Goddess who makes some big claims:


Men knew me not.  Those fools forgot the Eye that opened first -
The voice that spoke when time awoke and Heaven's water burst

'Midst raging void, ere dark destroyed, 'twas I who stooped to nod
Gave form to place o'er waters' face ... and made their precious God.
﻿
Writing these little nuggets can be frustrating at times.  Imagine spending hours agonizing over a single 140 character Tweet.  But the reward, when the wording suddenly falls into place, is immeasurable--a sense of hard earned accomplishment: A mountain climbed on trails that rhymed, a lofty peak achieved ... the sudden gleam of self esteem can scarcely be believed!