'Bays' were once all lakes or ponds (such as Jones Lake shown in the photo above).  But most of them have filled, drained, or silted over since the last ice age.  They're abundant on the coastal plain of North Carolina, where the Tar Heel state got its name (rendering Longleaf Pine heartwood into tar for the shipping industry).  There are thousands of Bays.  The Mountains-to-Sea Trail takes the hiker through many smaller ones and past some notable large examples that are still lakes.

And nobody has a definitive explanation for why they exist, why they are so abundant, even overlapping one another, what caused their unique elliptical shape, or why every one of the ellipses is oriented in the same direction--northwest to southeast.  Here's a Google Map photo of the area: 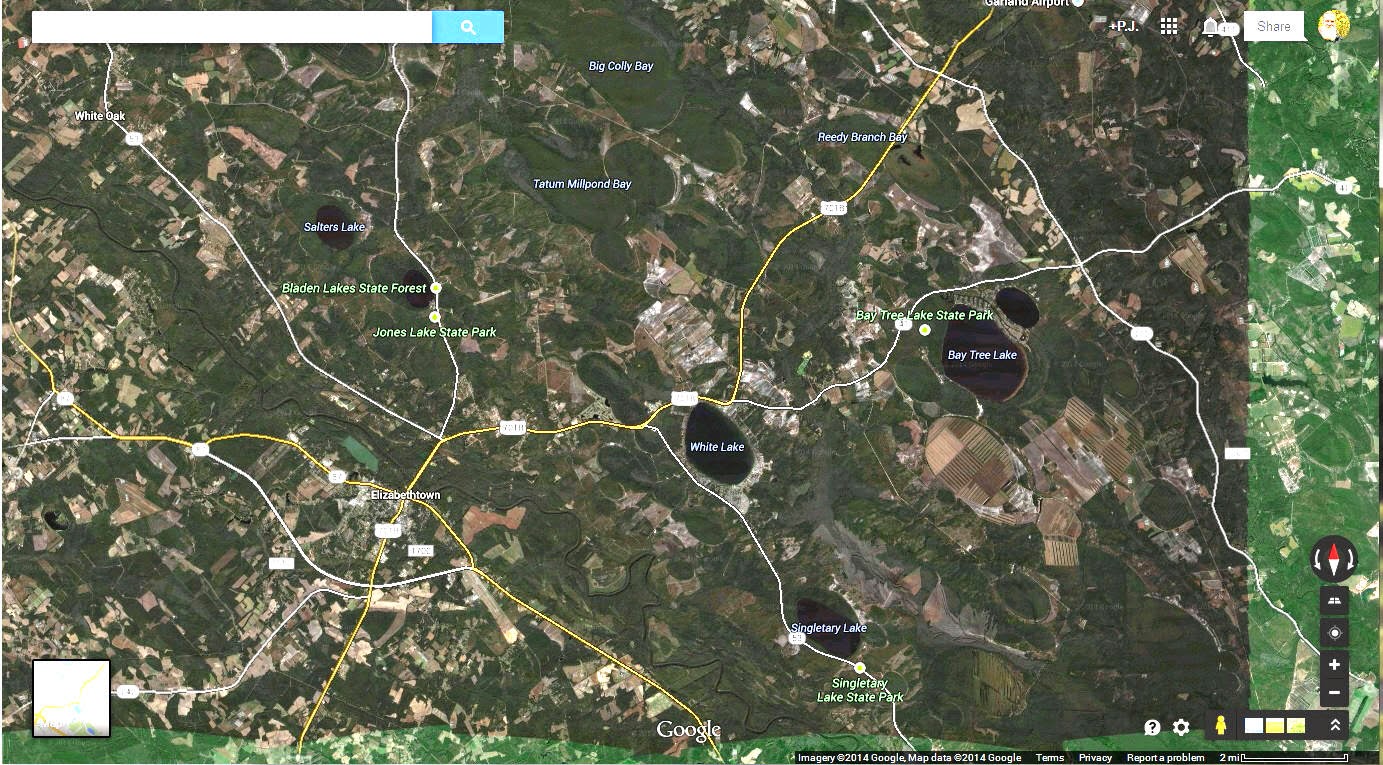 The Mountains-to-Sea Trail route passes four of the major lakes in this shot: Singletary Lake, White Lake, Jones Lake and Salters Lake.  Click on the photo to get a closer look.  Note the elliptical shape and orientation of these lakes, then look for green patches, large and small, with the same shape and orientation.  There are hundreds in this photo.  There's even one that has been cleared and turned entirely into farm land (lighter in color).

Theories of what caused the 'Carolina Bays' range from a meteor shower, perhaps a soft meteor that broke up into many fragments before impact, Artesian springs boiling up from an underground aquifer, Sinkholes, Ancient sea-bed spawning nests for schools of gigantic fish, and wind-driven ocean eddies scouring these shapes before the land rose above sea level.  All of these ideas have some attractive features, but all have been rejected because of various flaws.  The meteor impact theory is the only one that proposes an explanation for the common orientation.  If so, the pock-marks would all have to be caused by a single event--a single parent meteor.  But carbon dating shows that these features are not all the same age, and furthermore, meteor impacts do not produce elliptical craters, even when they impact the surface at a very steep angle.

So what's the solution?  Earth Scientists haven't yet settled on a full explanation, but the strongest theory was proposed by Raymond Kaczorowski in 1977 in his paper "The Carolina Bays and their relationship to modern oriented lakes." Geol. Soc. Am. Abstr. 9: 151-152.  The concept is that the shapes have been produced by the action of wind--both through 'lacustrine' processes: the waves the wind produces, which erode and sculpt the shoreline of the lakes and ponds, and by 'aeolian' processes--piling the sand into dunes along the shorelines in a similar way to the way a high dune develops along the ocean beach.

It has been shown (see this informative Wikipedia article), that the orientation of the lakes (the long axis of the ellipses) is precisely perpendicular to the prevailing wind.  Kaczorowski looked at similar lakes on Alaska's north slope, in the Texas panhandle, and in southern Chile.  Take a look at the abundant lakes in the flat sandy and boggy tundra around Barrow, Alaska:


The prevailing wind is extremely constant on Alaska's north shore.  It's from the East to slightly ENE year-around.  And the lakes are all elongated precisely at right angles to that direction.  What happens is that the waves on the lake scour away the sides of the lake (by a process called along-shore drift) and deposit the sediments on the downwind shore, so that an initially random-shaped lake gradually smooths out and widens out on each side and flattens out along the shorelines that are perpendicular to the wind.  Voila!

In the flat, sandy, boggy lowlands of the Arctic these lakes have had only 10,000 years or so to take this shape since the ice retreated.  In North Carolina the prevailing wind in these flat sandy boggy lowlands is out of the southwest and a bit more variable; and the dating of sediments and the sand dune borders of the Bays shows that they have taken as much as 100,000 years to gradually evolve their shapes--all through the last ice age when harsh weather was more frequent.

So maybe the Carolina Bays are not quite so mysterious after all.  But they certainly are seductive.  Here's another glamor shot, also taken right from the Mountains-to-Sea Trail.  This time the lake in question is Singletary Lake.


The sandy ridges that surround every bay are seductive in their own way, offering a desert-like environment where only scrub oak manages to eek out an existence. 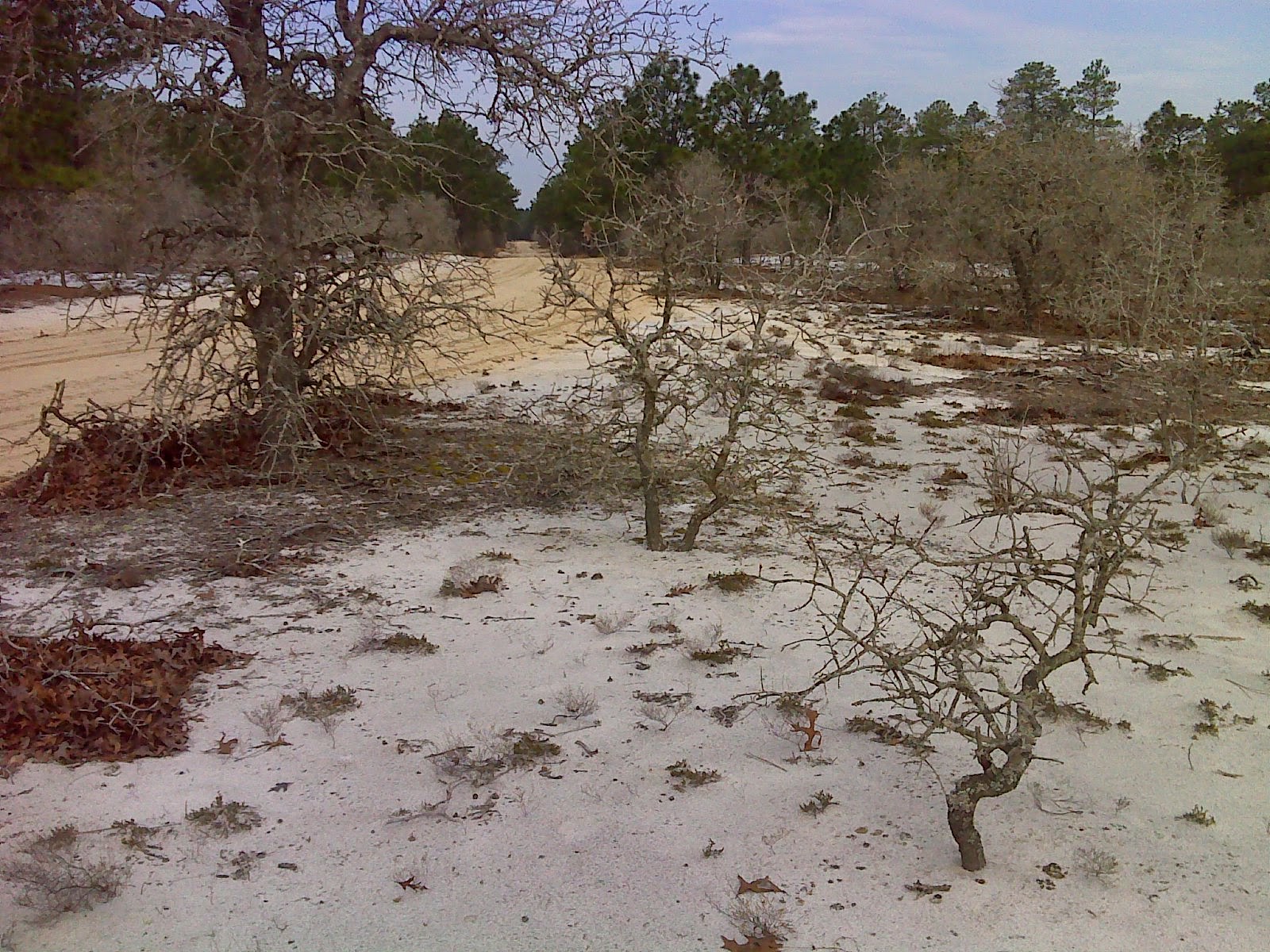 These are some of the unique ecosystems that this new Cape Fear Arch route of the MST offers the hiker.  It was a great pleasure to traipse through this area, to take it all in, and to learn a little.  This report combines four days of hiking, from Moore's Creek Battlefield to Jones Lake State Park.  When I was not hiking the 'Bays', there were some other seductive sights.  The trail crosses the Black River, one of the major Cape Fear River tributaries: 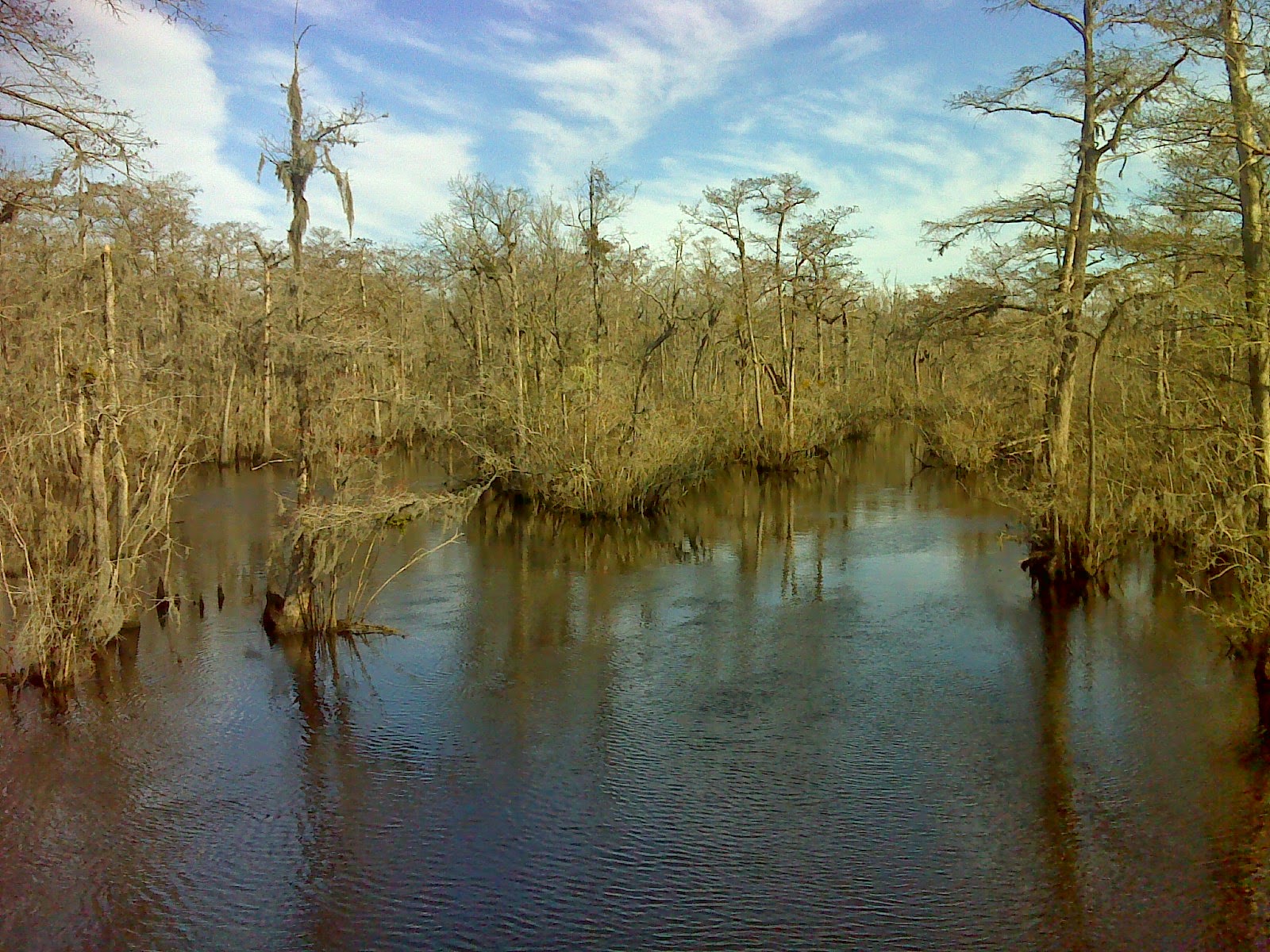 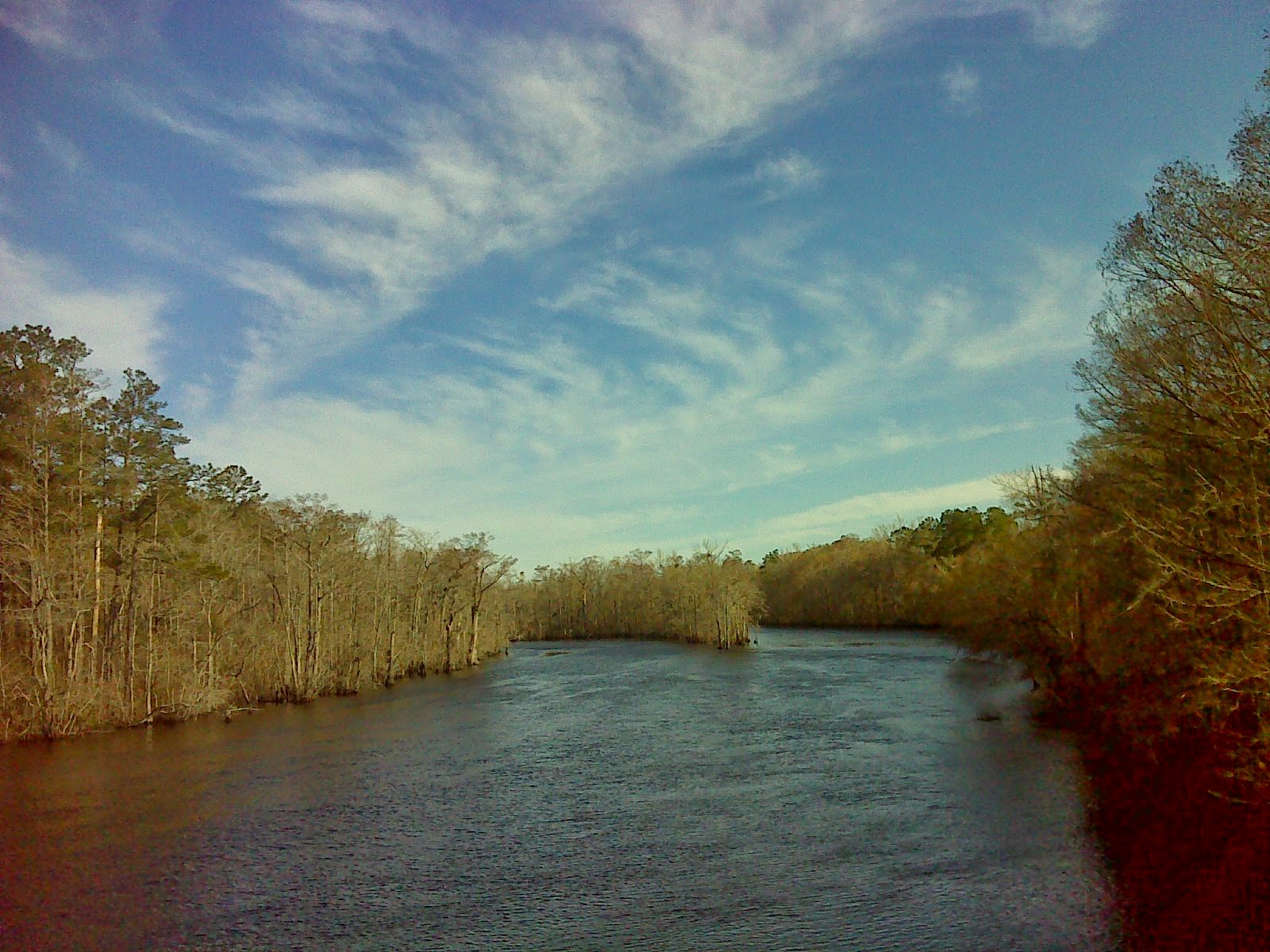 Spanish moss is abundant in the area.  Here's a nice morning shot:


And Longleaf Pine plantations are springing up all through this area.  They are an interesting sustainable agricultural crop - 'farmers' harvest and sell the pine straw as mulch. 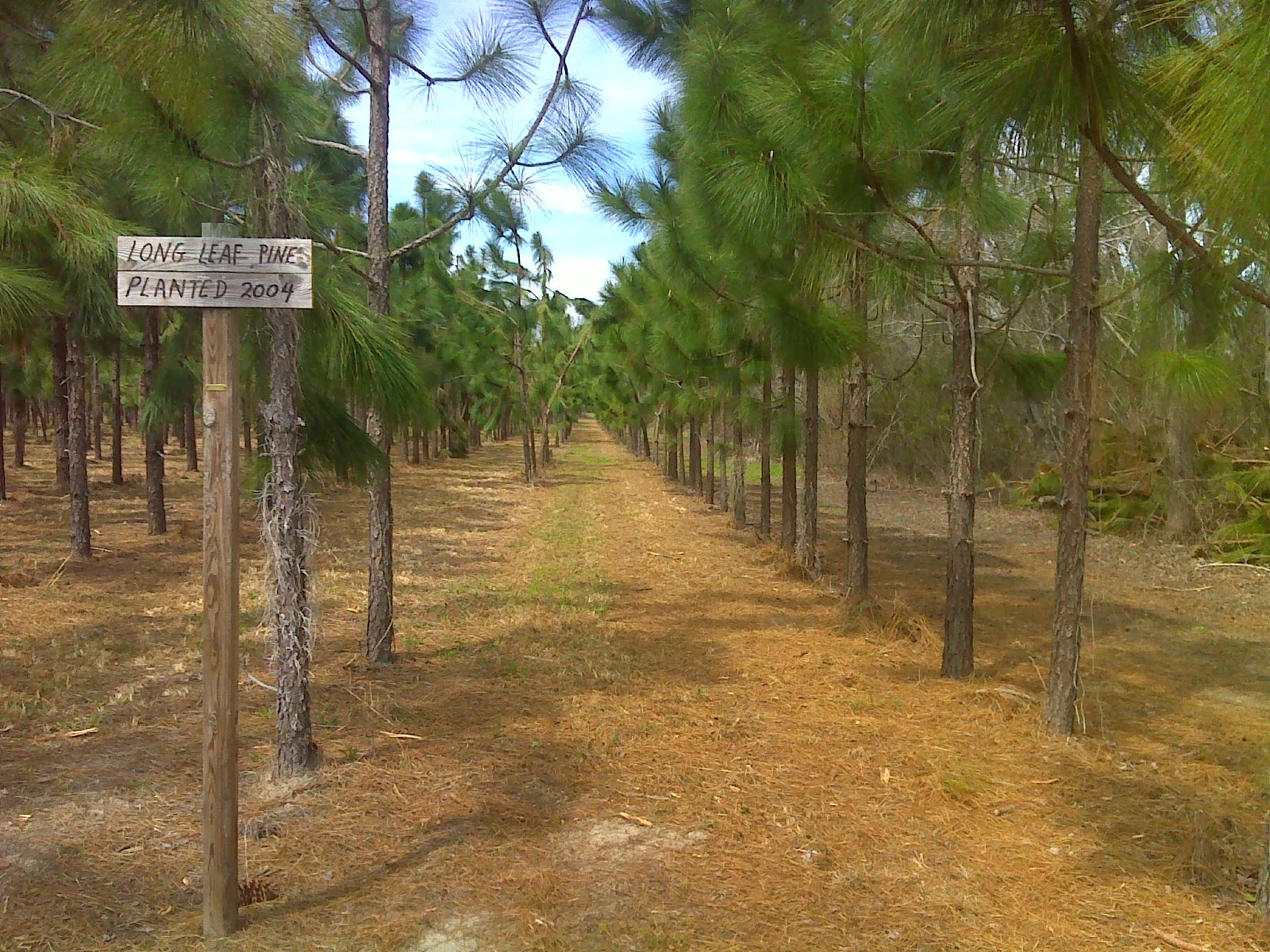 And then there are the much more eco-disruptive agri-business-sized blueberry farms - this one seen from the MST along Barnes Blueberry Road: 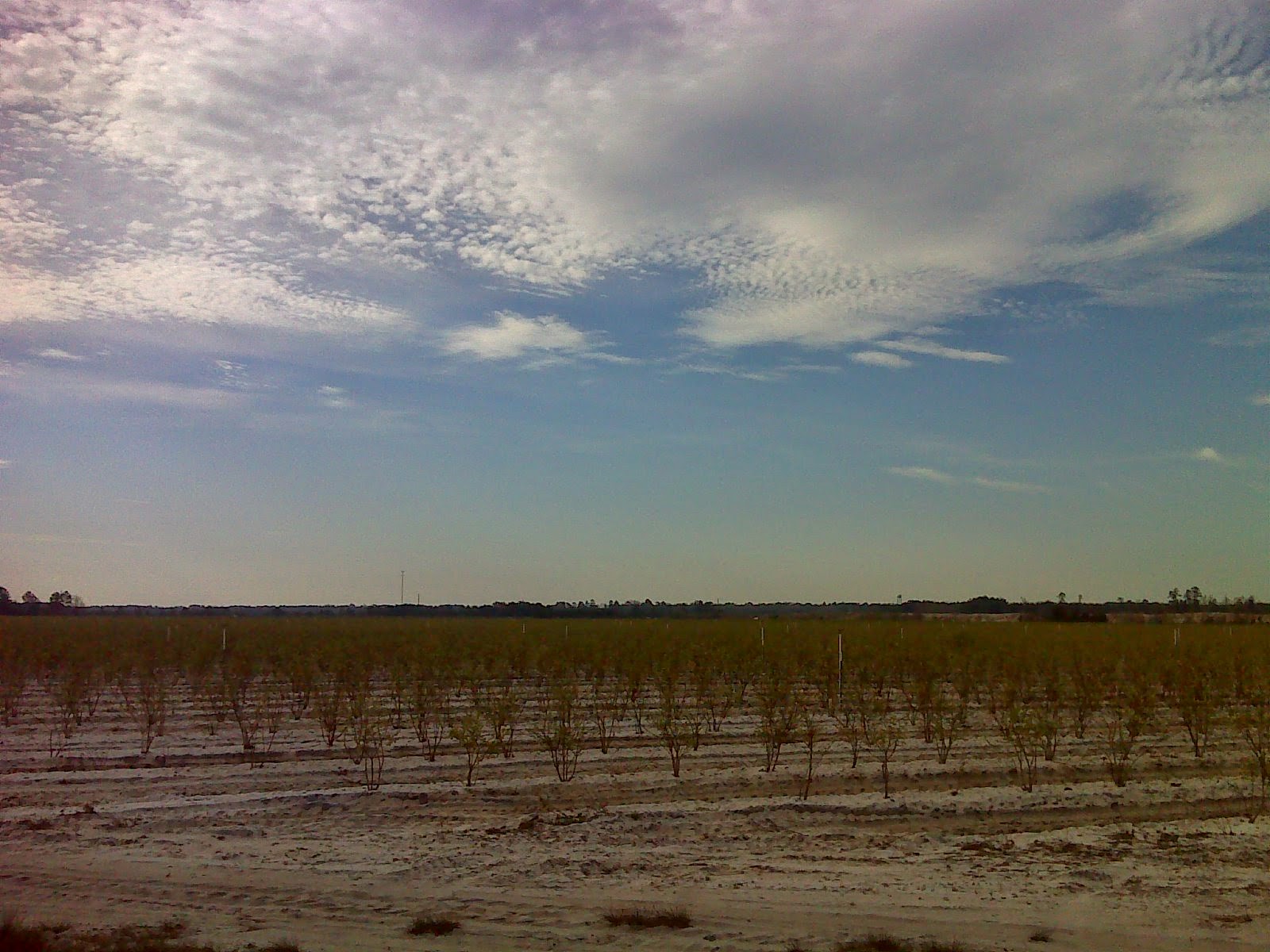 Meanwhile in Whitehall Plantation Game Land they were doing a massive clear-cut of hundreds of acres.  Not my idea of managing a game habitat responsibly.  But there may be a long-term goal:  To get rid of the artificial plantations of fire-intolerant Loblolly Pine and replace it with the more natural Longleaf and Bay species.  I'll reluctantly give them the benefit of the doubt. 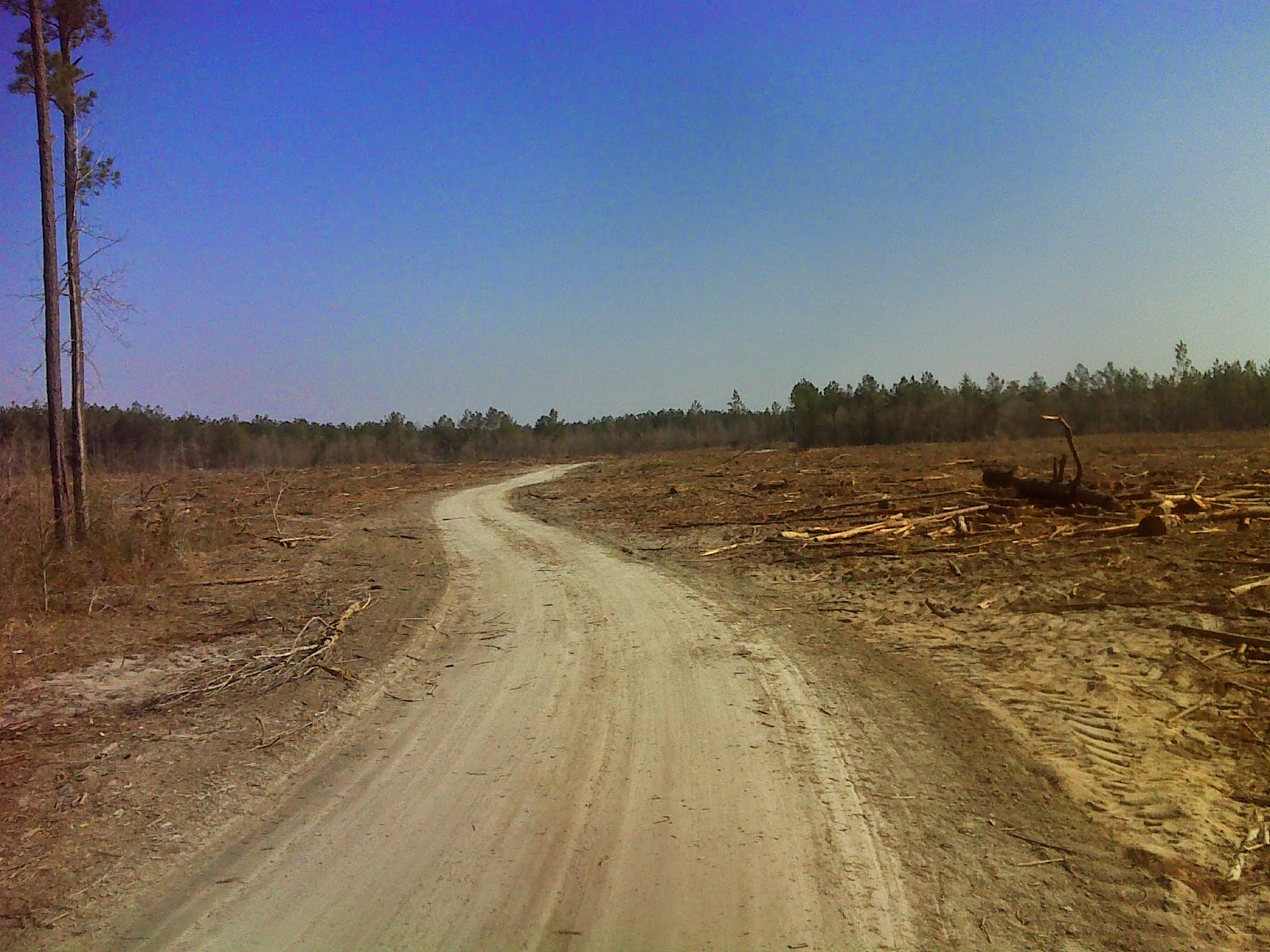 The ubiquitous Carolina Jessamine, an evergreen vine, was in full bloom: 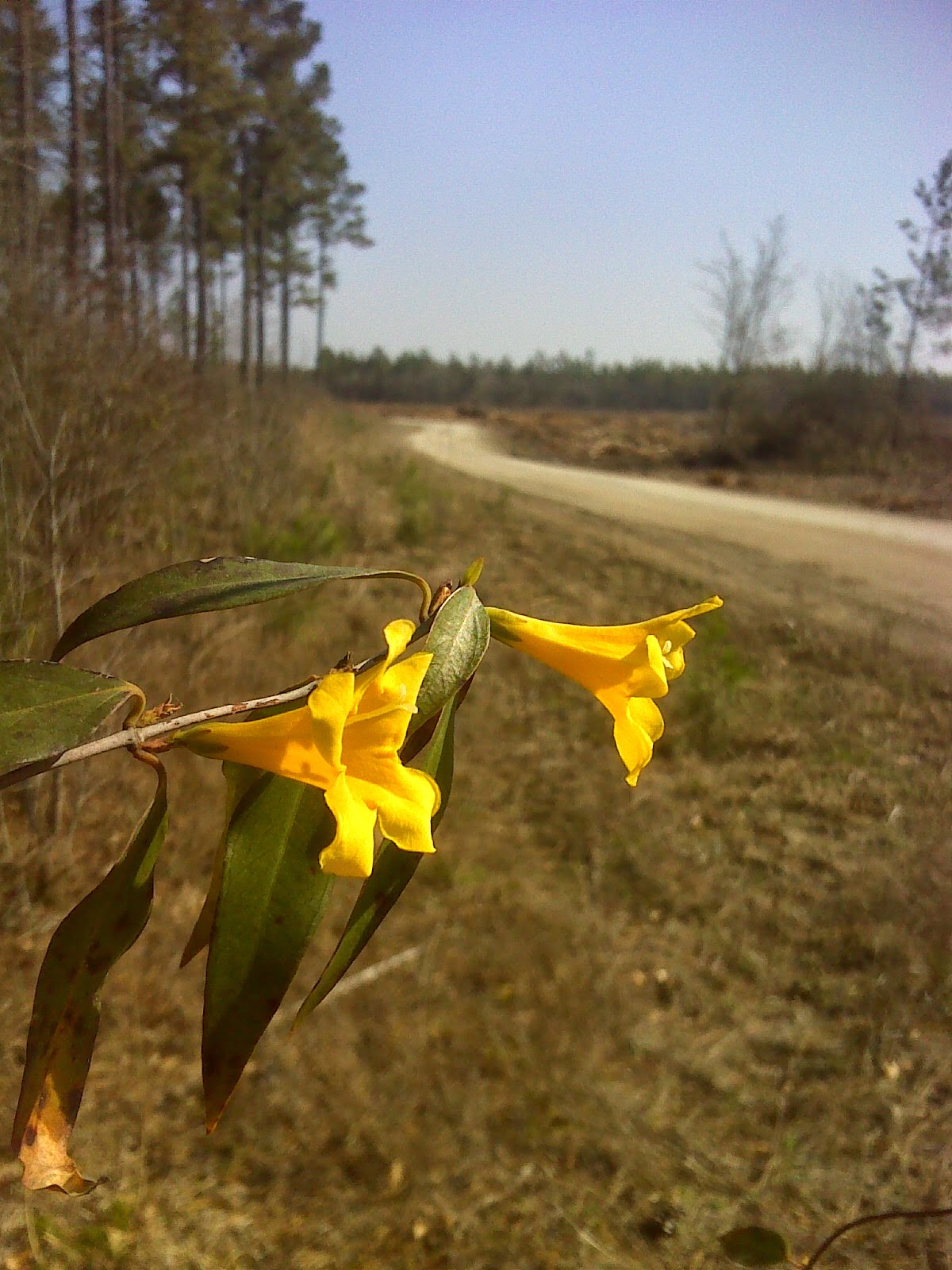 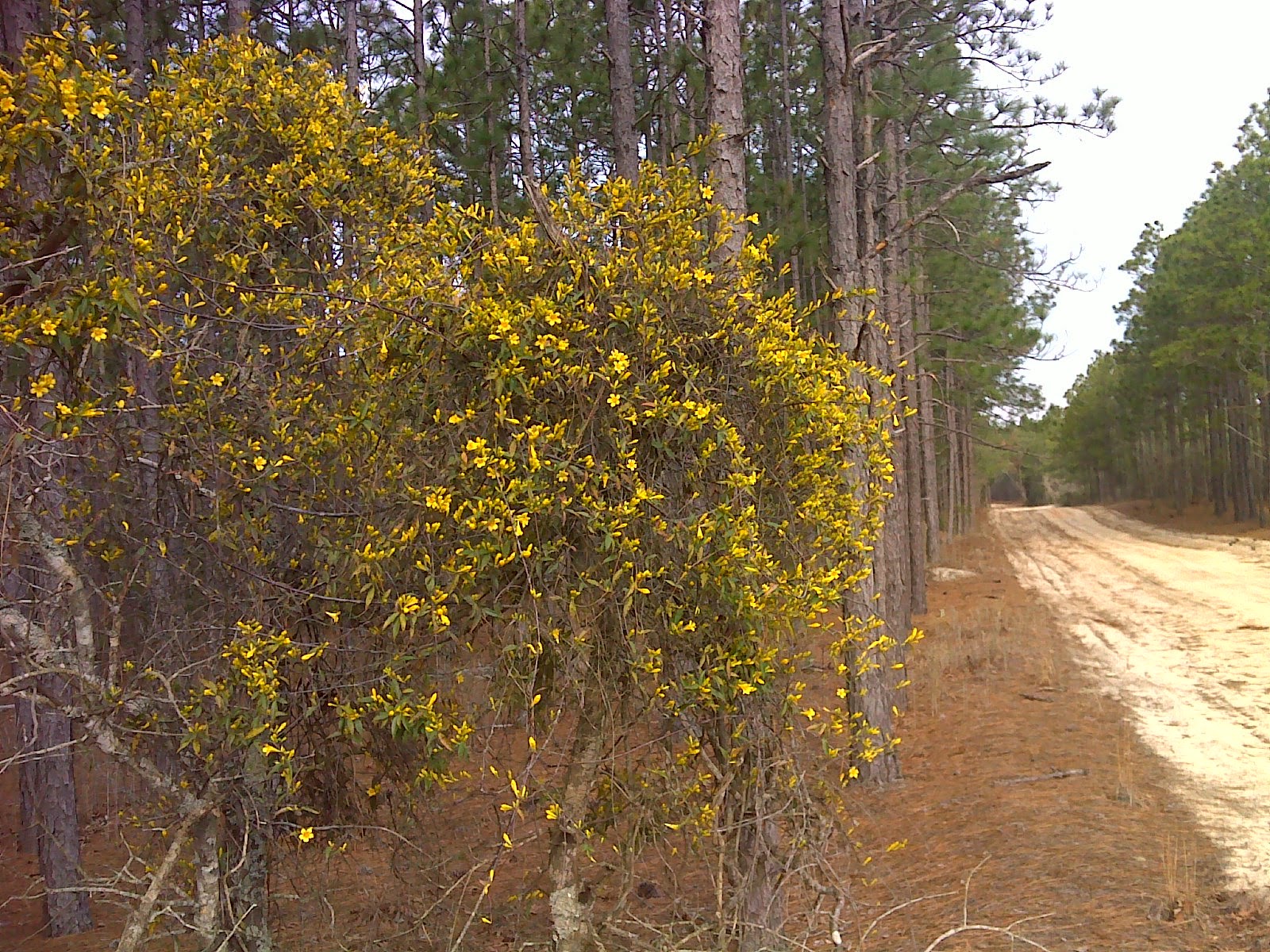 And I managed to snap photos of a few cooperative wild trail companions: 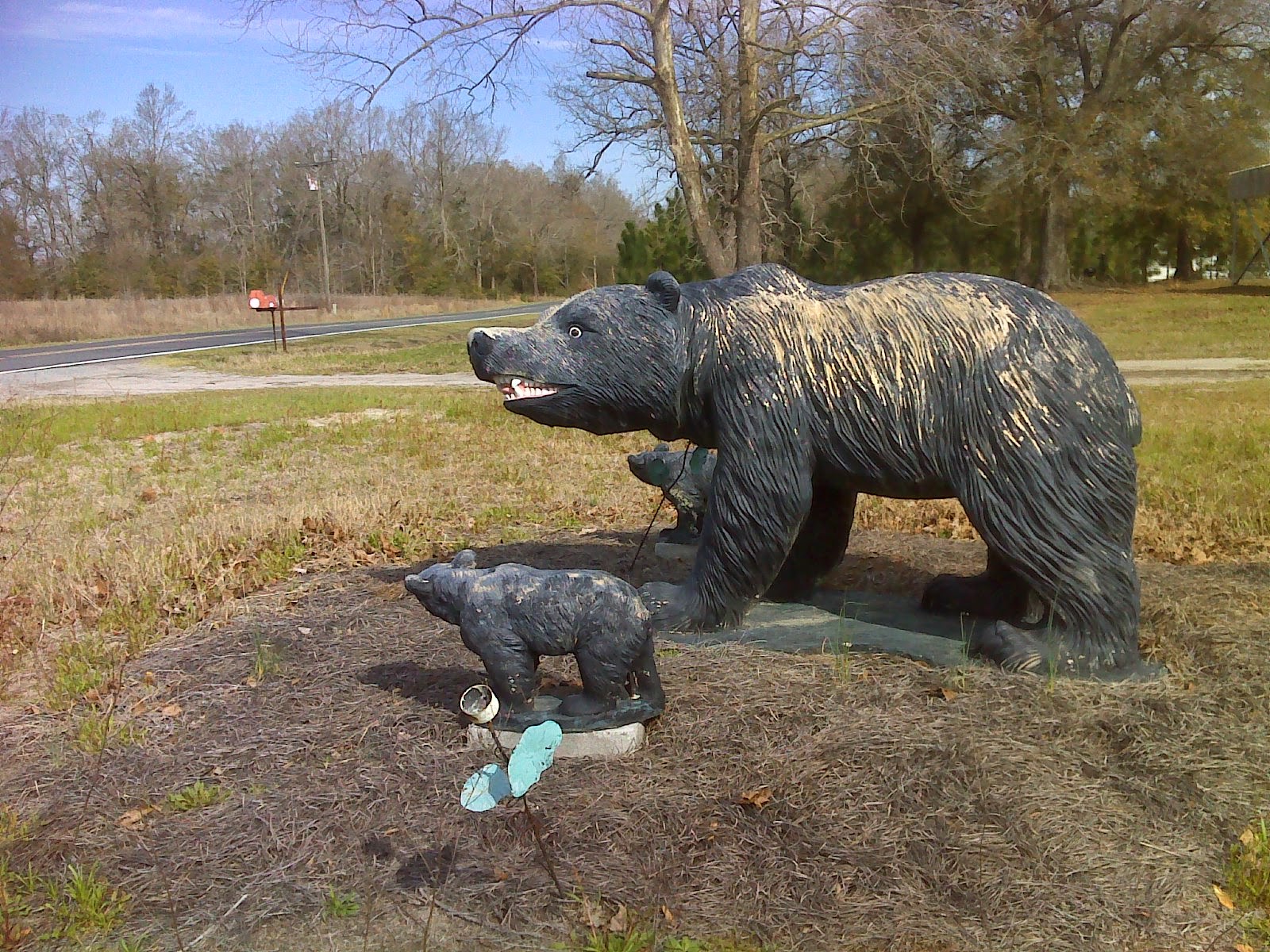 Yes, I was thoroughly seduced.  I'm falling in love with the serenity of Bladen County, North Carolina, and can't wait to see what's around the next bend.

Below is a map of the route of my four days of hiking through this wonderful corner of North Carolina.  Included are a couple of exploratory side trips and a slide show with 89 photos documenting the route:

MST Days 33-36 The Carolina Bays at EveryTrail
EveryTrail - Find the best Hiking near Wilmington, North Carolina
Posted by PJ Wetzel at 2:13 AM