Quantum Physics in a nutshell, part 1 of 3

In the Theory of Quantum Mechanics 'things' have fields that extend everywhere; and 'things' do not even have properties until they interact with other 'things'.  It's all about the interactions.  Space and time themselves are just manifestations of the web of connectedness between things.
'Stuff' like our conscious mind exists only because of this connectedness.
The scientist's natural urge to take 'things' apart to find out how they work met its Waterloo when we discovered Quantum Mechanics.  A hundred years later the greatest minds still declare that "nobody really understands it" (That's a Richard Feynman quote.  See the video linked below).
https://www.youtube.com/watch?v=w3ZRLllWgHI
"... Forest for the trees" says the Hiking Hermit.
Stuff Exists.  Things?  Not so much. 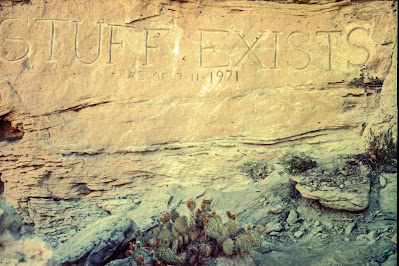 Email ThisBlogThis!Share to TwitterShare to FacebookShare to Pinterest
Labels: Musings of the Eremite, Paradox and religion