Nothing announces the arrival of spring like Cherry Blossoms. This year on the Mall and Tidal Basin in Washington DC, peak bloom of the hundreds of Japanese hybrid Yoshino Cherry trees was early--March 21st. Yoshino Cherries are world-famous for their abundant thick clouds of bloom. Out in the woods, our wild cherries make a more modest show, but the individual flowers themselves are every bit as pretty.

Here at the Cloister at Three Creeks, on the actual grounds of the 11-acre property, I've discovered only one blooming wild cherry. We have a number of black cherry trees, but these don't put on any serious bloom display. The one blooming wild cherry is an old one, with its top broken off, but it still produces a healthy crop of pure white blossoms. It appears to be a naturalized (self-seeded, probably by birds) example of the European flowering cherry Prunus avium. It was reaching peak bloom today, April 3. 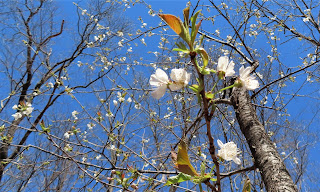 Also reaching peak bloom today was a much more surprising discovery on the steep rocky slopes beside 'Secret Falls', an almost inaccessible waterfall that may see a visitor or two in a month, maybe less (Most of them being me). It is a pink flowering cherry, probably also self-seeded by birds (who have no problem with the inaccessibility issue here). The species is most likely Prunus serrulata, a native of Japan. 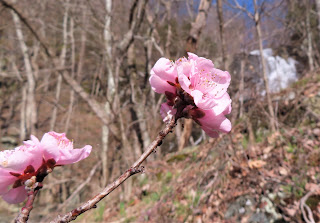 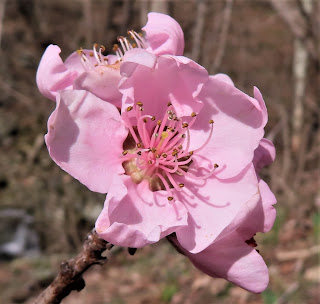 Both of these probably trace their lineage back to a garden tree in somebody's yard in the nearby valleys east of the Blue Ridge.

Also today I found a late blooming variety of the ubiquitous white-flowering Shadbush or Serviceberry tree. Most of these trees and shrubs, which are very early bloomers, have passed peak bloom and are going into leaf, but up at about 2200 feet elevation today I found a very pretty compact-flowering form in full peak bloom. Its blossoms have much narrower petals than the cherries. I show a couple photos here for comparison. 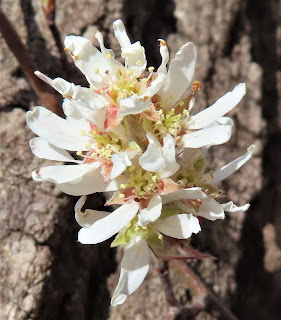 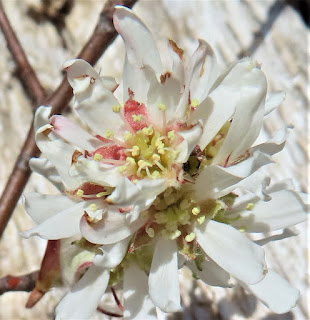 Coming back today to Secret Falls in order to document the peak bloom of the pink cherry, I had the opportunity to just sit and bask in the sound and spray and endlessly changing motion coming down this 120-foot-high cascade (I made the measurement today as part of my expedition). I visited a few other special waterfall spots too. Watching on video is not the same as being there, of course, but I hope I was able to share the joy of the experience with those who could never make the steep rocky climb to get there. Enjoy.