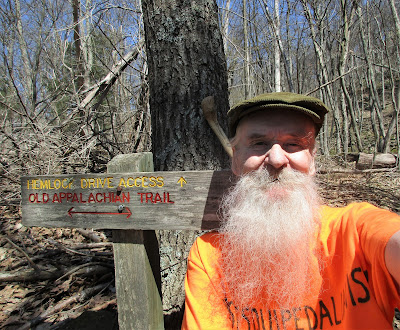 It took close to eleven years.  Yesterday I walked a little under five miles and my official total mile count passed the 20,000 mark.

So I've done the 20,000 double.   After summiting my bucket list 20,000 foot mountain peak in South America, I started hiking to keep the top-shape I had worked so hard to achieve.  I did a lot of hiking without counting miles, but the official count began in June 2010 when I bought a Garmin hiker's GPS.  I've been recording the miles ever since, and it is that GPS-recorded number that has just surpassed 20,000.

So for my hike venue, I chose a portion of the Appalachian Trail that has been abandoned by the AT Conservancy because of development that started in the 1970's.  There were actually two reroutes.  The original AT, routed since, I believe 1935 when the trail opened, has become a road on a ridge in a big development.  The AT was rerouted down the hill to the side in the mid 1970's, but then rerouted again in the early or mid 1980's because too many houses were being built within view of the 'new' route.

What I hiked was part of that original 1935 AT that only sees a few hunters or wacky locals like me, a portion of the short-term reroute - the trail as it was routed only between the mid '70's and the early/mid '80's - which had been completely abandoned and lost (more on that in a minute), and a portion of that short-term reroute that has become a local community trail called, imaginatively, the Old Appalachian Trail.  One of the signs along that is pictured in the selfie above.

But the real fun I've had lately was finding those other abandoned sections of original AT and that short-term reroute.

The 1935 AT came up a ridge on what was formerly a woods road, which was probably still in use by vehicles back in 1935.  Finding that was not terribly hard.  I found it on the first try.  It's about a mile of trail, and I've found three surviving white blazes, faded but clearly good old vintage AT white blazes: 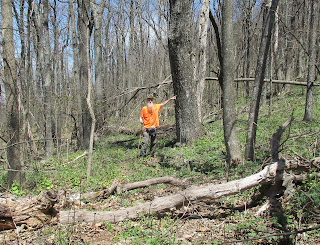 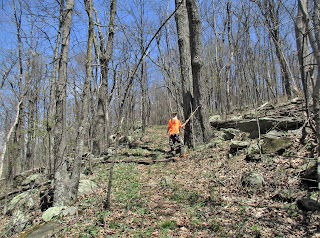 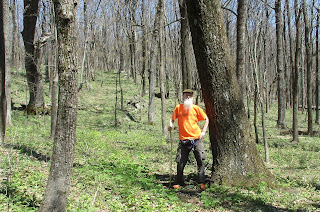 Finding the 0.6 miles of short-term reroute that was only used for a decade in the '70's and '80's and has not become part of the community trail was a lot tougher.  The only evidence of it is the old blazes.  Nobody ever used the trail until I started resurrecting it for my own use.  It took five different scouting trips to the area before I got my breakthrough and found the first faint blaze: 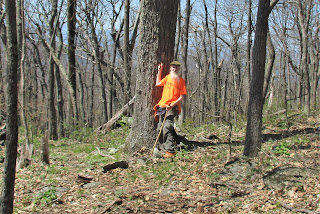 Then, over two more scouting visits I found half a dozen more old blazes and was able to fully piece together the route.  Here are three more examples of the blazes.  The coolest is the double blaze on the wall of a massive overhanging rock face.  Natural shade and shelter from all but the windiest rainstorm. 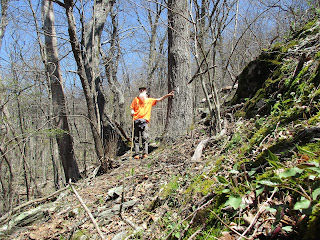 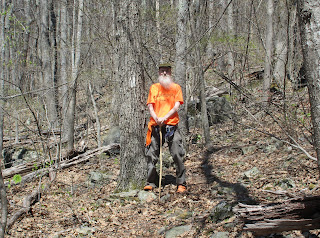 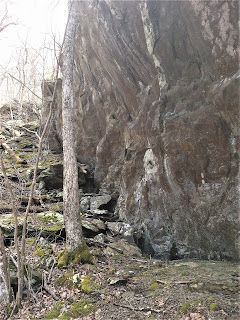 The rest of yesterday's hike, about another mile and a half, was on maintained trails, now blazed red.  Spring has sprung here in the Blue Ridge, and I got some fun flower shots. 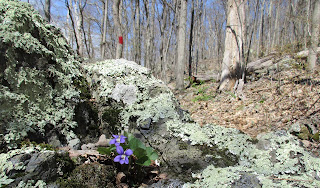 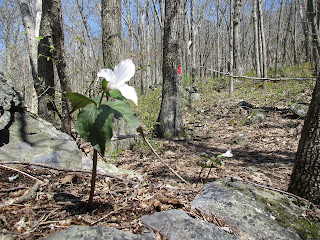 And the Scenery was first class.  They keep this part of the trail maintained for a reason.  I love these warm days before the summer haze sets in and before the emerging leaves turn the trail into a green tunnel. 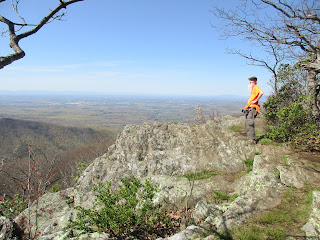 Great to be out, great to have warm weather, and so inestimably amazing to have a chunk of genuine Appalachian Trail that I can hike with near-virtual certainty that I won't meet anyone.
If I listen carefully, though, on a day as calm as yesterday was, I can almost hear the echoes of the footsteps of the Giants.  Myron Avery scouting the route in the '30's.  Grandma Gatewood thumping along in her Keds in the '50's.  Earl Shaffer, 'Peace Pilgrim' Mildred Ryder, Gene Espy, Dorothy Laker ... the list goes on and on.
Kind of sad, really, that developers took this remote historic piece of trail and paved it over.  Good that a piece of it has been left undisturbed, to be rediscovered by a foot traveler from a new generation - one on a mission to preserve wild places and to build a network of trails to connect them. 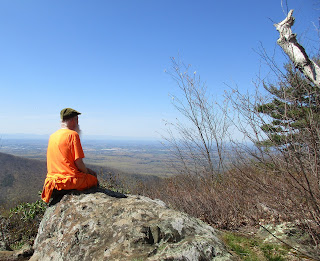