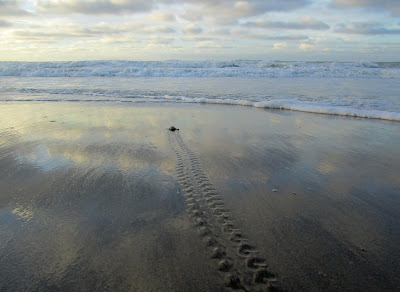 Today I head out into the unknown, intending to establish a new life in a place that has been called simply 'In Back of Beyond.'

It should be a challenging adventure.  Likely, it will impact my life as much as that notorious 1992 trek into the Alaskan bush undertaken by young Chris McCandless, whose words I quote in the title.  Yet I would hope for a much longer stay and a better outcome.  I'll be glad to avoid the sort of tragic finality that made Christopher McCandless a household name.

Yet any true adventure necessarily involves risk.  My footsteps will take me away from the safe shores of man's small 'Islet of the known', as T.H. Huxley put it, and into that fathomless, illimitable ocean of the inexplicable, there to learn from nature's raw forces and her shifting, beguiling, inexorable currents.

I will be exploring physical spaces ranging in scale from a single speck of dust, as Horton the Elephant did in Dr. Seuss's beloved children's story 'Horton Hears a Who', to speculative realms beyond the fringes of the known universe.

Why do I leave the known behind?  Because even the smallest thing matters.  Because even the greatest powers yearn to be understood.  And because somebody needs to be there.  Those who blithely sit in their lounge chairs on the shore, poking at their smart phones while the world passes them by, are in danger of being caught off guard when the tide rises.

Covid-19 is a reminder of the vulnerability of our global monoculture.  It is likely to be just the first wave of an out-of-control Tsunami.  Deep beneath the sea, unseen and unknown, mankind's greedy, self-serving behaviors have been destabilizing the underpinnings of our Isle of Comfort.  Great undersea landslides come without warning, striking when least expected.  And the greatest of these could see our precious island utterly swamped, inundated, and no longer able to support the lifestyle to which we've become addicted.

It might be good to have a few souls out there in the water, well away from the thrall, watching ...

Email ThisBlogThis!Share to TwitterShare to FacebookShare to Pinterest
Labels: Life and Legacy, Musings of the Eremite, Personal Continuous Footpath, sustainability