Hiking Lums Pond and the Chesapeake and Delaware Canal


There's a great new trail that runs for seventeen miles along the north shore of the Chesapeake and Delaware Canal.  It's called the Ben Cardin Recreational Trail in Maryland and the Michael Castle Trail in Delaware.  It's a paved multi-use trail and is just being completed.  In the middle, around Lums Pond there is a half-mile section that they're still working on and a brand new huge trailhead parking area that looked finished but the access road was still blocked off when I came through.


The C&D Canal is a wide barge canal, all at sea level, connecting the Chesapeake Bay and the Delaware River.


The trail itself connects the cute little tourist towns of Chesapeake City, MD and Delaware City, DE.  The route usually follows right beside the water.  Spectacular views are the norm. 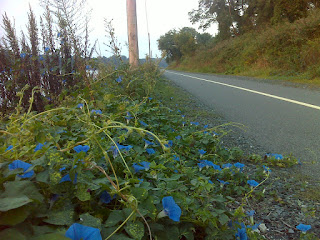 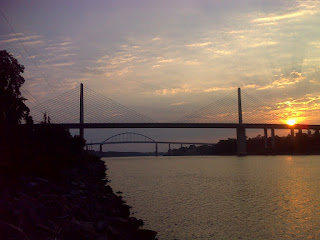 It was worth the side trip to explore this gem.  To get here my hiking protocol called for me to connect my personal web of hiking routes to it.  I call it my 'Personal Continuous Footpath'.  When I walk along I can point down to where my foot hits the ground and tell anyone who cares that these footprints run continuously west to the Appalachian Trail, south to Key West Florida, north to Katahdin, Maine, and west almost to Ohio (where I left off when my Dad got ill.)  The hikes reported here took me from the Mason-Dixon Trail to this gem of a trail.  Some day I hope to continue on across the 213 bridge and south to hook up with the American Discovery Trail in southern Delaware.

Making it especially worthwhile was Lums Pond State Park, which neatly fell along the route between the M-D T and the Canal.

Lums Pond ought to be called a lake, not a pond.  The first-class hiking trail that makes a circuit around it, called the Swamp Forest Trail is 6.8 miles long.  Beyond swamp views and plenty of immersion in forests of old trees, are the views of the pond itself. 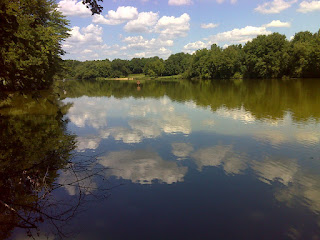 Lums Pond and I go way back.  When I was a little kid in the mid 1950's my family came here for picnics and fishing and swimming.  The boat rental area had a familiar feel to it. 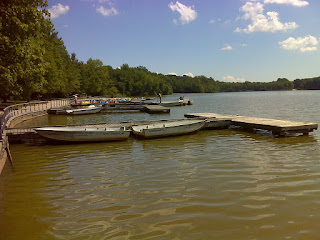 I think this was the setting for one of my all-time 'fish stories'.  My brother and I were fishing off a pier.  We could see a big old bass lurking in the shadows under the pier, but he wouldn't bite on our bait.  A bigger kid came along, maybe twelve years old, and we pointed out the big fish to him.  He said "I'll catch it for you," and he proceeded to take my fishing hook in hand, reach into the water under the pier, and with a swift move he manually hooked the fish and I pulled it out.  True story.  My Dad and brother were there to witness it.

There was even a smaller pond with an idyllic scene along my road walk between the Mason-Dixon Trail and Lums Pond. 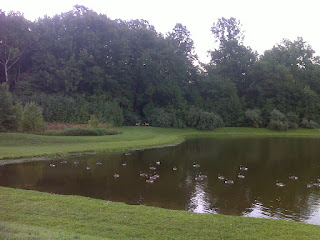 The east end of the Michael Castle trail has just been opened in the past few months.  It passes a newly rediscovered old African Cemetery, lost in the swamp for almost a century, 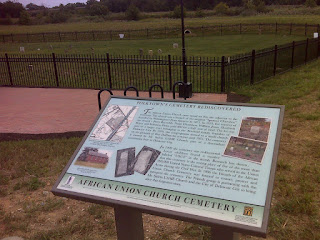 then runs along Canal Street then right through the tourist hub of Delaware City fronting Fort Delaware State Park on the Delaware River. 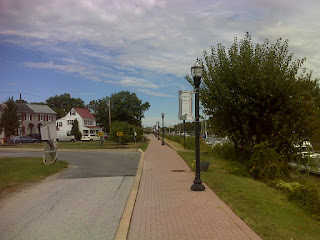 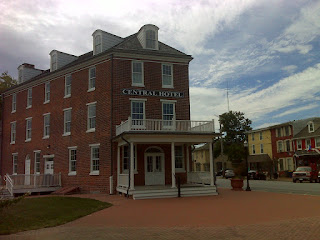 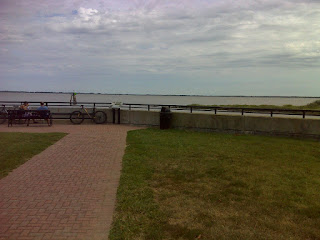 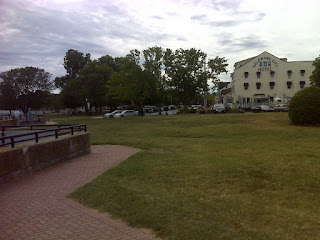 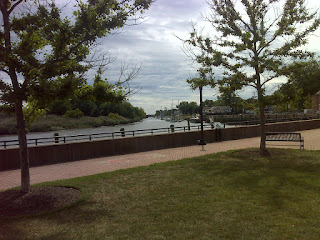 Here I had views of the New Jersey shoreline and a massive sea-going vessel docked next to the park. 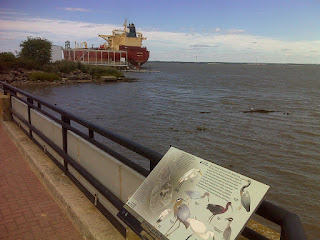 Below is a map that summarizes the hiking covered in this post.

After this delightful diversion I returned to the Mason-Dixon Trail.  Next report will cover the east end of that trail and my return to my childhood home grounds in Wilmington and Greenville, DE.  I encountered an entirely unexpected surprise there.  Stay tuned.