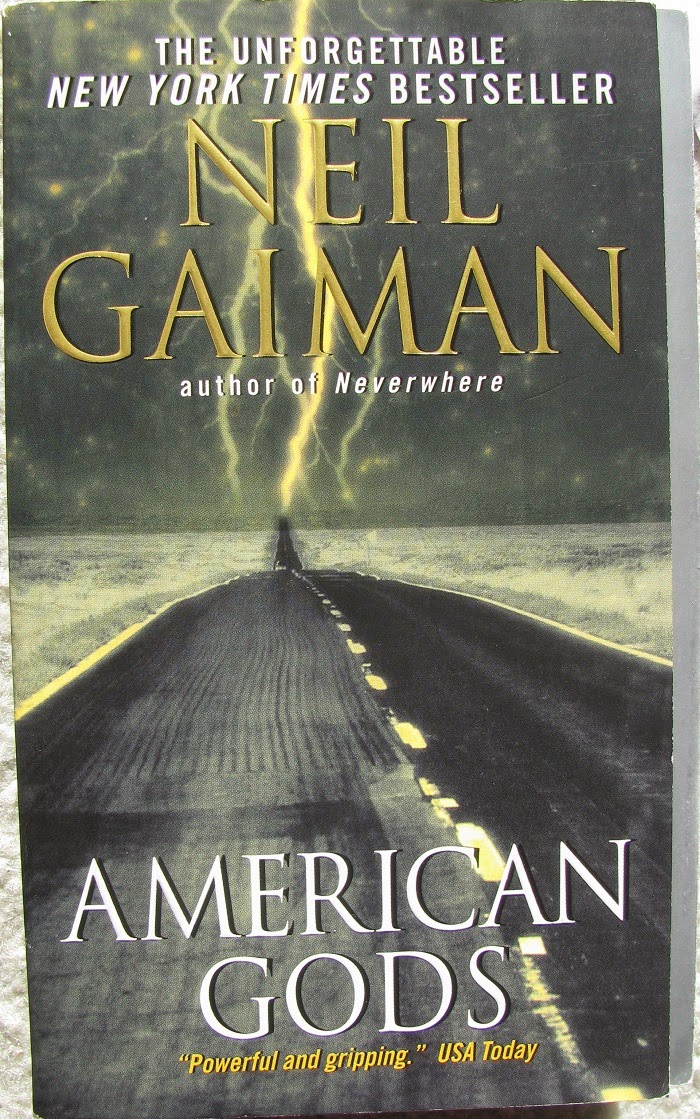 American Gods by Neil Gaiman
My rating: 4 of 5 stars

3 1/2 stars really. Once I finished, I judged the book to be interesting, worth the read, but not particularly inspired or memorable. However, it needs to be noted that after reading about 35 pages I literally threw the book across the room, vowing not to finish it.

I must have been in a bad mood. Perhaps I was just expecting too much, based on the seven pages of hype (truly hyperbole in this case) quoted from reviewers and included in my edition. The next day I reconsidered, mostly because this was a book I had asked for (as a present). Someone in my family paid good money for it. I owed them the courtesy of finishing it. I chose to be patient and look for the positives as I pushed on, rather than railing about the negatives (though I'll mention most of them here). By the middle of the book I had to admit that I was being well entertained. The last third of the book sparked. At last I started to enjoy the ride and to turn the pages with enthusiasm. Then the end began to drag again. There were, actually, about three endings. And then there was a Postscript. All the closure any reader could hope for. Little left to ponder or speculate about.

American Gods is a contemporary fantasy. There is almost no overt attempt at world building here. Everything except a place called 'backstage' is drawn from American and European common cultural experience. And 'backstage' is about as nondescript as an empty dark room. All of the imagination that Gaiman musters is directed toward the plot and character development. And even those do not stand out as particularly masterful.

The plot is awkwardly structured. In order to preserve the narrative tension Gaiman must sustain a false impression until near the end of the book--a classic device, to which I have no objection. However in this case the false impression is also one that appears so contrived and unconvincing that even the most passive and compliant of protagonists would surely question it. Yet our protagonist, an oversized ex-con called simply 'Shadow' is so submissive that he fails to question much of anything. This makes Shadow a character that is hard to get invested in. He seems more like a marionette being led across the stage of the plot by the author and by the other primary character named Wednesday, who is meant to be curmudgeonly at best, utterly dis-likeable at worst, and just comes across as such an enigma that I, as reader, could never decide what to make of him until I am told what to think near the end.


It is apparent that Gaiman wants us to suspend our disbelief at the 'Alice in Wonderland' level while clinging to a contemporary, entirely physical setting where the only Wonderlands we visit are artificial, man-made pseudo-attractions that really exist -- House on the Rock in Iowa County, Wisconsin, and Rock City on Lookout Mountain in Chattanooga, Tennessee. For me, that just didn't quite work. Sure there were dreams and visions galore, in the vein of Alice's single mega-dream, but these seemed strewn through the plot randomly for the convenience of the Author. Shadow is granted provisional temporary access to various phantasms but then they are withdrawn when their usefulness is spent.

If the book has a theme, or overarching message it is that America is a place where Gods do not do well. I don't think it is much of a spoiler to say that lots of gods originating in old world traditions appear in the book and are characterized as living in America. Unanswered is the question of why they chose to abandon their origin cultures (or do they have multiple physical manifestations) given that America provides them so little of what they need. To me this suggests a parallel to Gaiman's real life. An Englishman, he moved to America in 1992, settling in Wisconsin. Unlike the gods in his story, Gaiman has been richly rewarded for his move. And I don't begrudge him this - American Gods is a well written, workmanlike, ultimately satisfying tale.

View all my reviews
Posted by PJ Wetzel at 11:11 AM