This is the third and last in a series of introductory posts regarding the background and evolution of my novel ‘Eden's Womb’ In my last discussion I brought the time line up to 1969, at which time I had a firm concept about the plot, but had written very little of the text.  The following few years were turbulent ones for me, so the novel stayed on the back burner.  I graduated from college and moved to Colorado to go to graduate school.  My field of study was Atmospheric Science.  When things began to settle down personally in the early 1970’s my academic reading and research led me to a key concept that was to provide the setting for the novel as it exists today.

The novel had always been about a young man taking a cross country tour and getting caught up in an apocalyptic collapse in society while stranded far from home.  In its earliest manifestations I had envisioned the trigger to be a socioeconomic collapse leading to political anarchy and conflict.  But new research in the field of climate at the time was pointing to an intriguing possibility: that an ice age might be imminent.  Yes, an ice age.

My inspiration came from, among other places, an infamous paper written in 1971 by a man who was to become one of the more outspoken proponents of the theory that humans are causing global warming, Stephen Schneider.  In 1971, Schneider was second author on a Science paper with S. I. Rasool titled "Atmospheric Carbon Dioxide and Aerosols: Effects of Large Increases on Global Climate" (Science v.173, 138–141). This paper used a 1-d radiative transfer model to examine the competing effects of cooling from smog and warming from CO2. The paper concluded:

"However, it is projected that man's potential to pollute will increase 6 to 8-fold in the next 50 years. If this increased rate of injection... should raise the present background opacity by a factor of 4, our calculations suggest a decrease in global temperature by as much as 3.5 °C. Such a large decrease in the average temperature of Earth, sustained over a period of few years, is believed to be sufficient to trigger an ice age. However, by that time, nuclear power may have largely replaced fossil fuels as a means of energy production."

Carbon dioxide was predicted to have only a minor role. However, the model was very simple and the calculation of the CO2 effect was lower than other estimates by a factor of about three, as noted in a footnote to the paper.

As years went on and climate models got more sophisticated, the consensus shifted 180 degrees, and yet even modern global warming theories allow for the possibility the planet could be plunged suddenly into a serious cold period.

In any case, starting in 1972, I began writing a new version of ‘Eden's Womb' in which the hero is stranded by a massive and unending snowstorm in a nearly instantaneous climate shift which plunged the planet into an ice age.

Sound familiar?  Many of you may remember the 2004 movie ‘Day After Tomorrow.’  There was also a lesser known 1998 made-for-TV film called 'Ice' with a similar concept.  Just goes to show you – very few ideas are new.  It only took Hollywood a quarter century to take ‘my’ idea and turn it into a good apocalyptic movie.

Early versions of ‘Eden's Womb' were set in the near future (I chose 2010) and followed the adventures of a character named Luke Aeolus, who became stranded in an August snow storm in the town of Saskatoone.  Sound familiar?  For those of you reading Book I as published here on my blog, you'll find that I've resurrected the remnants of those early versions.

In 'Eden's Womb', just like in ‘Day after Tomorrow,’ those snows just continued to pile up month after month, year after year.  The primary setting of 'Eden's Womb' takes place 289 years after Luke’s adventures in a time when they had become the stuff of fireside legend in Saskatoone, a village now locked so deep in the middle of the ice sheet that they had become trapped there and isolated from the rest of the world. 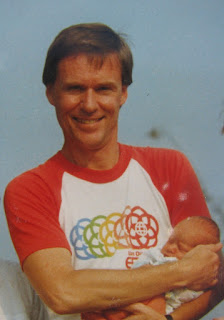 Me in 1989 with the little bundle that changed my priorities.
With about half of a manuscript done, I set the novel aside
to concentrate on family.  Finally in 2006 I got back to work in earnest,
and 'Eden's Womb' began to take its final shape.


Between 1972 and 1986 I worked on the story intermittently at best, restarting from scratch several times and refining the plot to the point where the original concept had morphed from a thriller/adventure story to a full-blown Sci-Fi extravaganza set in what seems like a parallel universe on a planet with an identical history to Earth’s, but with one major difference.
In 1986 I got really serious, writing about half of this sci-fi version of the book by hand—that is, using pen and paper.  I had hundreds of pages in my rambling scrawl, and was even developing a bit of arthritis in my hand from all the writing.

But this was the dawn of the era of the PC, so when I got my first one—a Mac Plus with a full Megabyte of memory (wow!) I finally transferred my hand-written text to digital format using a Neanderthal version of Microsoft Word for Macintosh.  Some of that ancient (nearly quarter century old) digital version remains intact and finds its way into Book One (Chapters 20, 22, and 26).

But for the primary plot of ‘Eden's Womb' I moved on - far on.  The plot morphed again—from hard core Sci-Fi to more of an epic fantasy adventure tale set in our Earth’s far distant future: no alternate universe, just our good old familiar 21st century Earth extrapolated hundreds of thousands of years into the future.

The skeleton of Luke’s story as conceived back in 1972 remained unchanged through this morphing--Ice Age and all, but his experience was now set in the neo-stone-age culture that humans had adopted in 635,039AD.  I have a reason for picking that far-future time frame.  Science can project the Earth's orbital fluctuations that far ahead, and it will be a time very favorable for a significant new Ice Age.

'Eden's Womb' begins three centuries after Luke’s arrival in Saskatoone on that August afternoon when the snows first struck (‘The Cleansing Storm’ as Saskatoone’s survivors have come to call it).  And by then Saskatoone has been surrounded and isolated by a new ice sheet 200 feet deep and unbroken for hundreds of miles in every direction.

So there you have it--the long, winding path, that led to the book I'm posting here on this blog.  I hope the insights add a bit to the reading experience.  Enjoy.