Review of 'Year Million': Let's think outside the box! 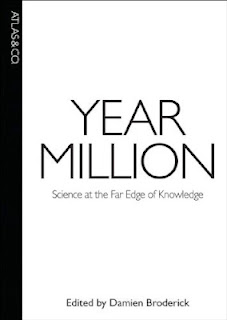 Having spent a whole lot of time thinking about the distant future as I write Ice King, set in 635,037 A.D., I was super-excited to read this compilation of fourteen noted scientists' take on what the world might be like in the year 1,000,000 A.D.

Although there's plenty of food for thought here, I come away feeling that Broderick's compilation was too limited in scope for my liking. The vast majority of the discussions either stay so deadly cautious with their grounding in present reality as to be of little interest, or they leap headlong into the half-century-old Freeman Dyson visions of man as a plundering wave of barbarians hurtling clumsily across the cosmos, answering to some implicit call of `manifest destiny'.

Hello! There are just a few other basic paths that futurists ought to be exploring! I took my own cue about the future from successful species on our planet. What will Year Million look like for sharks? For cockroaches? Well, unless the tech-drunken barbarians dismantle the whole planet in order to feed their insatiable, energy-gluttonous Matrioshka Brains, Year Million is going to be pretty much business as usual for any humans still around. I'm betting against the barbarians.

Yes, that is my biggest complaint: the lack of consideration of sustainablility is repeatedly rubbed in the reader's faces. There's Stephen B. Harris' concept of raping the universe to bring back deuterium for fusion fuel, or Robin Hanson's exploration of the escalating race to be the first to exploit new star systems, in which he explicitly refuses to consider what the settled culture behind the frontier might have to say about this state of affairs. Then there's this gem from Wil McCarthy: "It's hard to say exactly what our descendants will use their energy for, but it's a safe bet they'll use a lot of it, and will be hungry--always insatiably hungry--for more. Some things never change."  Safe bet?  I'll take some of that action.

And what about the Dystopian and post-Apocalyptic alternatives in which the barbarians get their just deserts--totally missing from the discussion. My personal vision could be considered a post-Apocalyptic solution with a generally serene outcome:  humans grow up and learn to live sustainably--that is, until our post-human rivals start stirring up trouble. So there's yet another topic utterly ignored: species radiation out of the parent human stock.

With all its shortcomings, the Year Million does occasionally stretch one's mind. Everybody is likely to find something worth more thought. I learned a few useful things about simulated reality. It turns out that our reality is not likely to be a simulation in somebody's Matrioshka Brain Virtual Reality game - thanks, Rudy Rucker. Then there was the realization--extrapolated from Sean M. Carroll's essay on entropy--that "Complexity" always seems to be at its peak in the present moment. If this idea can be elevated to an axiom, it implies some profound truths about the symmetry of past and future and their roles in our perception of reality. Quantum uncertainty insists that the past is just as malleable as the future--according to the Copenhagen Interpretation we define them both based on what we choose to observe and on what we choose to ignore or fail to observe. Ultimately, the Year Million is not just something for idle armchair speculators to toy with--it's a full-contact, participatory sport.
Posted by PJ Wetzel at 9:05 AM