Why I want to hike. Why I will hike.

Have you ever seen a puppy let out to run after a day locked in a cage? Have you ever been told something was impossible, then tried it anyway? Have you met people who were given a second chance in life, and seen how much zest and energy they bring to ordinary day-to-day life?

I am that puppy. I gave it a try. I have been granted a second chance. And that's why I hike.

The story goes back to the early 1980's when, as a result of a decade of intense amateur bicycle racing, I ruined my left knee. The orthopedist told me I had chondromalacia--a thinning of the cartilage on the inside of the kneecap causing painful bone-on-bone rubbing. I couldn't climb a flight of stairs. It was painful to walk ten steps. There was no treatment except ice and no cure except to avoid overusing the knee, which for me meant giving up bicycling permanently, and giving up all hope of any strenuous activity using my left leg. The doctor told me I could look forward to developing early arthritis in the joint, and prescribed me some Motrin (now known as 'Vitamin-I' in hiker parlance--ibuprofen--back then it was still only available by prescription).

I became a couch potato, doing nothing beyond casual walking, relying on upper body activities like gardening and brush clearing for exercise. I always favored the left knee--babied it. After a few years the discomfort in the knee subsided. It still felt 'there'--I don't know how else to describe the feeling. I knew it was still not right. But it didn't cause me pain as long as I didn't do something stupid like try to run--even ten yards. (Because the few times I did, the pain returned and stayed for days.)

Fast forward to December 2006. I was approaching 60 and was watching the Discovery Channel's multi-episode coverage of an expedition to climb Mount Everest. I was moved--inspired. I don't know why. The movie 'Bucket List' with Morgan Freeman and Jack Nicholson was still a year away from release, but I was at that age--time to start thinking about doing things on my bucket list before I was too old to try.

I had always wanted to climb a mountain in South America that was higher than 20,000 feet.  It was the one item that clearly sat at the top of my personal 'things to do before I die' list.

I decided to give it a try.  I would begin to train to make that climb.  I made a pact with myself before starting that I would jump in with no expectations, and that if the 'there' feeling in the left knee ever became 'pain', I would quit immediately and go back to the couch.  I did *not* want that debilitating pain to rule my life ever again.

I started training by repeatedly hiking up Bob's Hill, in the Catoctin Mountains near Frederick, MD.  (I've posted about that hike before).  At first I carried no weight and went very slowly--a mile and a half in around an hour.  The knees objected, but only in the normal way, not in that special awful way that I remembered.  The chondromalacia seemed 'in remission'.  Later I read something on the internet that suggested that it was one of the few joint injuries that can heal (I can't find that reference at the moment, though).  I worked up to climbing the hill three times consecutively, in under 45 minutes each time while carrying fifty pounds of water in my pack.

Every day I marveled at the lack of knee pain.  Every day I was pushing it harder.  Every day it was responding positively.  I could barely believe it.  I honestly felt as though I had been 'let out of jail' - felt like that puppy freed from its shackles and bounding gleefully, inexhaustibly, at breakneck speed round and round the park.

Long story short, I checked off the 20,000 foot mountain item from my bucket list in early 2010, and just kept walking.  Since then I've retired from the intensive aerobic aspects associated with serious mountain climbing, but have steadily increased my daily horizontal mileage.  The knee remains stable and I feel in better shape than I have in thirty years.

And so it was inevitable.  Living on the east coast of the US and doing lots hiking, I 'used up' all the local trails.  I can only hike the same route a few times before I crave something new.  So next up was to start ticking off bits of the Appalachian Trail.  I quickly fell in love with it--meeting and talking with other enthusiastic hikers, appreciating the high level of maintenance, and just knowing that those white blazes extended continuously for a thousand miles in either direction.

Doing a thru-hike was never on my bucket list.  It still isn't.  I'm doing this hike because it's THE hike - tops in its class - and because however far I end up going, the experience will give me joy.  The puppy is out of the cage! 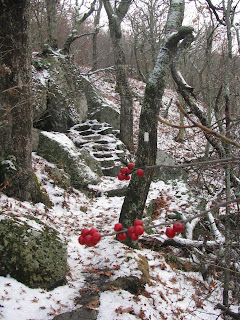