The Fifty Trail leaves the AT at Middle Carry Pond and turns southeastward to follow the newly opened (2014) Arnold Trail/Great Carrying Place Portage Trail – a route of historic significance, dating back to Pre-history and made famous in 1775. It’s the route taken by America’s best known ‘traitor,’ Benedict Arnold, on his campaign to seize Quebec City from the British. This was well before he became the best known ‘Turncoat’ of the Revolutionary War.

Leaving the Arnold Trail at its southern end at the Kennebec River, the Fifty Trail follows Carry Pond Road and then Ridge Road to cross the Kennebec at Bingham. From there the 190-mile Road Walk follows quiet roads to the Atlantic Ocean at the country’s eastern-most point, oddly called West Quoddy Head. There’s a state park and the famous lighthouse there, and the Fifty Trail ends with the rugged four-mile Coastal Trail through Quoddy Head State Park to the Lighthouse. 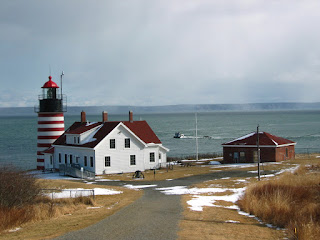 Here the journey ends. Be sure to stay to watch a sunrise there at the first point in the country to see the sun each day.

Appalachian Trail’s best maps by far come from the AT Conservancy: http://atctrailstore.org/guides-maps/official-a-t-guide-sets/

HEART OF THE TRAIL:

The Appalachian Trail from Maine Highway 4 to East Flagstaff Road, passing the plaque celebrating the opening of the last segment of the trail near Sugarloaf Mountain on August 14, 1937, and crossing over Avery Peak.

To the Appendix: Hawaii