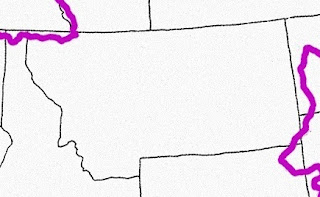 Included in this route is a long hike along the British Columbia-Alberta border in Canada, following the Great Divide Trail, which is thoroughly documented but rugged and primitive in places. Much of this distance is in Jasper, Banff, Kootenay, and Waterton Lakes National Parks of Canada as well as several provincial parks.

The backcountry crossing of the international boundary is permitted here, and is perhaps the only such place in the world. See specifics below.

After 3.3 miles hiking southward in the US beside Waterton Lake, the Trail joins the Pacific Northwest National Scenic Trail and turns westward.

The segment ends at the Montana-Idaho border.

WHEN TO HIKE: Hiking near timberline has a very limited season. Whether you’re at 12,000 feet in southern Colorado or 2000 feet in Alaska, the season begins late. Trails can remain impassable with waist-deep slushy snow banks well into the latter part of June. These guidelines come specifically from Glacier National Park but apply to the high country in all segments of the western US and Canada. Take heed:

Trails are often muddy and covered in puddles or flowing water at lower elevations. Water crossings are deep, swift, and cold. Seasonal suspension and plank bridges start to be installed in late May. Expect snow cover at higher elevations and be prepared with map and compass skills for route finding, and ice axe and crampons for crossing steep slopes. Snow conditions can change daily: icy in the morning, soft in the afternoon. Backcountry Campgrounds earliest scheduled openings begin June 15th, but the Belly River region in the northeast and the North Fork region in the northwest are often accessible in May.

Trails dry out and firm up at lower elevations. Melting snow presents dynamic hazards at higher elevations, ice axe often recommended. Seasonal suspension and plank bridges are all installed by mid-July. Generally, Ptarmigan Tunnel doors open in mid-July. Snow drift blasting and treading is usually completed by Trail Crew by the end of July. The majority of the backcountry campgrounds are open by mid-July although the routes connecting the campgrounds may still be impassible.

Generally, snow and water hazards are gone although water hazards may suddenly re-appear after thunderstorms. Backcountry Campgrounds are open but may close at any time due to bear activity or forest fire for days or weeks.

Some Septembers are as nice as August, but there is a now a greater chance of significant snow fall. Snow storms may deposit lingering snow, requiring map and compass skills for route finding. Snow hazards may begin to develop. Bears are most active at this time of year, foraging for up to 20 hours a day. Most seasonal suspension and plank bridges are all removed by late September. Ptarmigan Tunnel doors usually close by late September.

Trail and campgrounds go into winter status. Minimal maintenance is performed through the winter months.

INTERNATIONAL BORDER CROSSING: The backcountry trails connecting the Great Divide Trail on the Canada side and the co-incident Continental Divide Trail and Pacific Northwest Trail on the US side are especially privileged by the 1932 international agreement creating this first-ever International Peace Park. The area on the south end of Waterton Lake is called “Goat Haunt” named for the prominent nearby Goat Haunt Mountain (supposedly a favorite haunt of mountain goats). You can hike across the border freely, but must check in and go through customs. You are still crossing an international border despite the Peace Park designation.

When traveling into the United States:

When entering Canada from the U.S. you must call Canadian Customs at (403) 653-3535 for acceptance/rejection by Canadian authorities as soon as you arrive in Waterton Townsite where there is a ranger station and other services. Crossing the Canadian border at Waterton with a firearm is prohibited.


HEART OF THE TRAIL:

1957.4 – Northern Terminus of the Montana segment and of the Great Divide Trail

(The Great Divide Trail is a remote and challenging off-road hiking trail that runs 696.4 miles to US Border at Waterton Lake). We defer to the Great Divide Trail Association web site and associated resources for the most current and detailed turn-by-turn route description. There is a new guide book coming out in summer 2018.

2653.8 – Southern Terminus of Great Divide Trail at US border. Beginning of HEART section Trail south of border is called the Waterton Lake Trail and is not part of either the Continental Divide Trail or the Pacific Northwest Trail