Fiction with all the urgency of prophecy 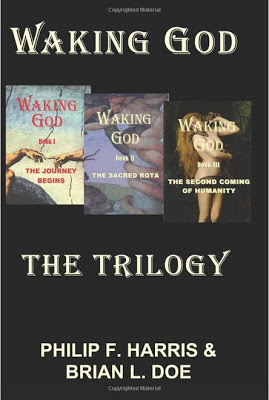 Phil Harris is chairman and guiding force behind All Things That Matter Press.  And he is an accomplished author in his own right.  There is so much material I could cover in this author profile that I decided to keep it focused on his 'magnum opus', 'Waking God: The Trilogy' - a series of three apocalyptic books that could be described as 'religious fiction', yet with underlying themes that Phil and his co-author Brian Doe clearly consider to be not fictional at all.

'Waking God' was originally published as three separate books, each of which stand well on their own.  They are subtitled 'The Journey Begins', 'The Sacred Rota', and 'The Second Coming of Humanity.'  The consensus among reviewers is that if you like one, you ought to get all three. 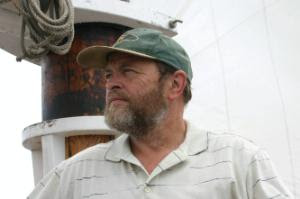 Here's Phil's own succinct take on this body of work, from his blog.  For me, this gives a clear flavor of his vision, and his interpretation of the underlying message that the books are meant to convey.

"In the trilogy the world is described as place of chaos and turmoil; governed not by the politicians, but under the thumb of corporate interests. The environment is collapsing, religion has gone awry, and disasters plague every corner of the globe. Most of the Trilogy occurs after 2012. This was a date that the 'media' decided was to be the apocalypse. It is important to remember that the prophecies of the Mayans, Hopi, Nostradamus and others never said that 12/21/12 was the end of the world. It simply made good press. In fact, in keeping with conspiracy, it is quite possible that 12/21 was played up that way so that when nothing apparent happened on that day, the masses would simply dismiss the prophecies as just nonsense and not worthy of anymore consideration. All of the prophecies are still valid because they spoke of a process, not an end product.

So what happens now that the same warnings are being issued by science? We have warnings about a rapidly changing climate; the spread of  resistant diseases; tectonic plate shift and earthquake  events are being publicized; clearly economies are in disarray; and, religions are certainly faltering. Whenever you pay attention to the news, there are stories of flood, drought, famine, pestilence and mayhem. These come not from the prophets, but from science and on the ground fact.

Are these warnings being heeded? Have the special interests managed to blind the people to events that will forever alter their fate? Have 'they' cried wolf so often that people are desensitized to the calamities around them?

There are some great things happening on planet Earth. People are beginning to awaken to a new sense that something wonderful may be on the horizon. The question is, who will [win] the race: Those [who] are waking up, or those who would keep the human spirit in false chains?"

And here are my favorite reviews of each of the three books.  Book I, reviewed by R. Rubenstein:

"Waking God has some very real people doing some powerful stuff to the universe.... And they are serious..And they are 'pissed.' Their world speaks to us with both the angry voice of prophesy and the ethereal sound of the interceding angels. ...It is biblical and other worldly with universal truths inside these pages applicable to all religions. Where iconoclastic hipsters make war and metaphysical, but non-religious intellects suddenly believe, this Waking God is not what it seems. As a Jew who never did understand what the difference was between--say, a Presbyterian or a Protestant, I initially felt like a cheerleader on the sidelines, but one who didn't understand the game, or whom to really root for. But around mid-way through this extraordinarily woven labyrinthine, I realized Waking God was talking directly to me with the language from the Bible. Mara, the lovely heroine(angel or devil?) seems to be gliding through a stoned out acid trip. Not that I know anything about THAT. Andrew, the teacher, also is in a surreal setting as if, at times, they want to create a H.P. Lovecraft horror show. Yet, despite that, or maybe because of the odd assortment of interesting little venomous people capitalizing ad nauseum, on religion,if you ask me, I would call this a moving, deeply religious work. Waking God is ultimately a spiritual, supernatural thrill ride-- spellbinding, passionate and furious. One never knows who is going to survive the chapter. As a writer, I also must add that Harris' prose jumps off the page with visual and poetic clarity. It is a pleasure to read a real craftsman at work on a project he obviously so passionately believes.."

"About two, maybe three years ago I read Waking God, by Philip F. Harris and Brian L. Doe. I was instantly drawn into the world they created, which, is really our world - this world, except seen through the eyes that most do not look through. The vision seen when the veil of deceit and insidious religious dogma, put in place nearly two thousand years ago by the organized church for political and power grabbing reasons to ensure that "all truths are not to be known by all people," gets lifted. It would be classified as a suspense thriller in the "Theological Science Fiction" genre, but one has to wonder and gasp if ... the "fiction" part is perhaps unwarranted?

The Sacred Rota, newly released and the second book in the trilogy, picks up on the fast paced and highly entertaining, yet fundamentally belief shaking and unsettling saga, where Waking God leaves off, with Michael (the Archangel) and Mantrella (a.k.a. Lucifer) in a power struggle to determine who will rule and what the fate of mankind will be. Adam - the original man, and a god Himself, lies slumbering. If he wakes, the DNA in mankind's hidden god-seed is activated and Michael and his cohorts are, well ... I won't spoil the whole read for you. But it's not good news for the angels if that happens, and Michael will stop at nothing to prevent it. Who stands in his way, thwarting his every turn, championing the cause of humanity?

Mantrella. Yes, you read that right. Lucifer - the biblical "fallen angel," also referred to in the scriptures as the "Bright and Morning Star," is on our side. There is no devil, Lucifer is not your enemy, he's been falsely demonized by the Catholic Church to keep people in fear and abeyance to the Church for nearly two thousand years. Until Pope Peter in The Sacred Rota comes along. Peter is going to release the ancient secret hidden truths to the masses. And he pays for it. The Bilderberg group, well on its way to establishing the "New World Order," sees to that.

There are many controversial elements in this trilogy. Traditionally held fundamental religious dogmas and beliefs are put into question and done so in the form of a first rate sit-on-the-edge-of-your-seat and clench your teeth thriller of a book. Harris and Doe make a great writing team; the writing is sharp and yet breezy, extremely imaginative and compulsively readable. The book is not only a deep and ponderous read underneath the quick action with other worldly yet well developed and believable characters, it provides several hours of entertainment in literature that ranks with the best out there.

The book stands alone as a great read by itself, but I'd highly recommend getting both Waking God and The Sacred Rota, even if it's in reverse order once the Rota compels you to go back and catch up fully on the tale. I, for one, am looking forward to the third and concluding book in the series with a great deal of anticipation.

But be forewarned, this is not a Sunday School book. You may be shocked. And it might just be for your own good."

"The Second Coming of Humanity is indeed a wild ride. Set against the backdrop of the impending 2012 shift, this spiritual thriller will make you question everything you thought you knew about reality. Drawing from both ancient and contemporary wisdom teachings, Doe and Harris not only find new ways of interpreting old insights, they develop fresh insights of their own, all the while turning misused dogma and outmoded stereotypes on their heads and creating the mental space for the reader to discover his or her own truth between the lines. This truth will certainly be best discovered if you read all three books of the Waking God trilogy, but The Second Coming of Humanity is also an excellent stand alone. If you liked the mental trip you found yourself on with the The Matrix or The Da Vinci Code, you'll want to, as author Sandy Cohen suggested, fasten your seat belt at least one more time. There is still a very important destination that awaits you, and The Second Coming of Humanity is just the vehicle to take you there."

This is the eighteenth of a short series of Author profiles that features fellow authors in the All Things That Matter Press family.